The first day in the month of May is celebrated as May Day – also known as International Workers’ Day – almost everywhere in the world, with the most glaring exception being the nation whose citizens’ blood fertilized the soil of its inception: the United States of America.

First suggested at the first congress of the world socialist Second International in 1889, May Day was meant to commemorate Chicago’s infamous Haymarket Massacre of three years prior, in which dozens of labor demonstrators were gunned down by police after one of them allegedly threw a dynamite bomb.

The holiday was formally recognized as an annual event at the International's second congress in 1891. Three years later, following a particularly nasty Wall Street panic, the May Day Riots took place in Cleveland, OH. Ten years later, in 1904, the International Socialist Conference meeting in Amsterdam called on "all Social Democratic Party organizations and trade unions of all countries to demonstrate energetically on May First for the legal establishment of the 8-hour day, for the class demands of the proletariat, and for universal peace."

Considering its origins and history, it shouldn't be too surprising that The Powers That Be have never had much love for May Day. Right-wing governments, invariably favoring Capital over Labor, have historically downplayed the holiday’s significance, often celebrating “Labour/Labor Day” on another day – for instance, as in the USA and Canada, on the first Monday of September.

Unfortunately, simply shifting the holiday to a different spot on the calendar left folks with nothing to celebrate on the first day of May. The solution? How about the one-two punch of Law Day and Loyalty Day? Yes, that’s right, in the late 50’s, Republican President Dwight “Ike” Eisenhower and his Republican-led Congress created these two (count’em!) brand spanking new holidays to take people’s minds off the central role labor has played in human progress over the years!

Of course, the above covers the “Red Root” (Labor) version of May Day. There exists another, “Green Root” (Pagan) version of the holiday, related to the sex-heavy Celtic festival of Beltane and the somewhat less sexy Germanic festival of Walpurgis Night (which is named after a Saint, after all). Some of the more hard-core versions of this European celebration were done away with after Christianization, but surviving traditions usually involve dancing around a Maypole – representative of either a Sacred Tree or a giant phallus, depending on who you ask – and other fertility-related activities, such as presenting gifts of flowers to loved ones. Beltane, specifically, involves ritual purification through fire, and if you've seen the The Wicker Man (1973), you already know how much fun that can be. 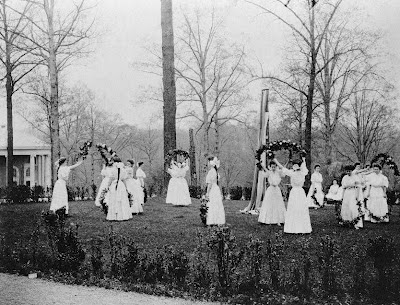 ALSO ON THIS DAY

On this day in 1776, a Jesuit-trained Bavarian philosopher by the name of Adam Weishaupt adopts the name Spartacus and establishes a secret society which he dubs the Order of Perfectibilists, more popularly known as the Illuminati. Both Weishaupt and his long-defunct organization remain as poorly understood today as they were by their contemporaries, a point underscored by the fact that Thomas Jefferson counted himself an unabashed admirer.

On this day in 1863, the Confederate Congress passes a resolution declaring no Black Union soldiers may be taken prisoner. Instead, all Black soldiers are to be shot on sight. And yet, some people still try to make believe the Civil War was about "state's rights," and had nothing to do with the institution of slavery. Go figure!

On this day in 1915, the RMS Lusitania departs from New York City for her 222nd – and final – crossing of the Atlantic. Six days later, a torpedo launched from a German submarine would sink her off the coast of Ireland, killing twelve hundred. 128 of the dead were Americans, which caused an about-face in the US population’s doggedly non-interventionist stance vis-à-vis the Great War. Within months, Americans would be dying in their thousands in the hideous, Satanic meat-grinder of trench warfare, ostensibly to avenge the deaths of those unlucky dozens. 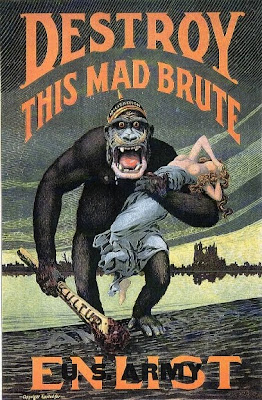 On this day in 1930, the Solar System’s ninth planet is saddled with the decidedly Hellish name Pluto, borrowed from the Greek Lord of the Underworld. Upon their discoveries, Pluto’s moons would be given the similarly Stygian monikers Charon, Nix and Hydra. Who makes these decisions?!

On this day in 1945 a German newsreader announces that Adolf Hitler has "fallen at his command post in the Reich Chancellery fighting to the last breath against Bolshevism and for Germany.”

On this day in 1948, The "Democratic People's Republic of Korea" – a.k.a. North Korea – is established by “Great Leader” Kim Il-sung. Folks, you couldn't pack more irony into a single sentence if you tried. Today, 75 years and two generations of despotism later, North Korea retains its title as quite possibly the single most fucked up nation on a planet that is known for being home to some incredibly fucked up nations.

On this day in 1956, the polio vaccine developed by Jonas Salk is made available to the public. And we all lived happily ever after.

On this day in 1960, a Lockheed U-2 spy-plane being piloted by American Francis Gary Powers is shot down over the Soviet Union. Powers survives by ejecting, and his U-2 glides to a soft crash-landing that leaves it frustratingly intact, allowing the Soviets to learn everything about the plane's structure and abilities when they pick it apart. Powers is interrogated for months, then forced to confess to espionage. He was sentenced to 10 years hard labor at a Soviet work camp, but ended up serving less than 8 months before being sent back to the USA in a spy-swap. After a different kind of rough landing back home (he was interrogated by hostile officials from the CIA, Pentagon, a few Senate committees and even Lockheed!), Powers continued his aviation career until 1977, when he died while heroically ditching his helicopter rather than risk a crash-landing in a field where children were playing..

On this day, in 1986, Russia finally tells the rest of the world about the nuclear accident at Chernobyl… five days after what was at that time the worst meltdown in the history of nuclear power. Much to the delight of the Ukrainian Tourism Bureau, “Fukushima” is poised to replace “Chernobyl” as short-hand for “FUBAR Nuclear No-Go-Zone”.

And, finally, on this day in 2003, Americans celebrate "Mission Accomplished Day" when Preznit Dubya appears before a cheering crowd of soldiers on the deck of the USS Abraham Lincoln in full padded-crotch regalia to declare that "major combat operations in Iraq have ended.” Sadly, nothing could have been further from the truth. 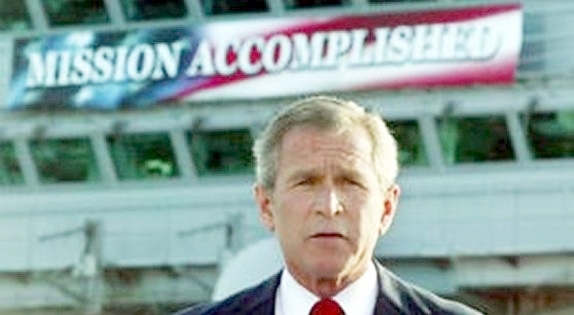