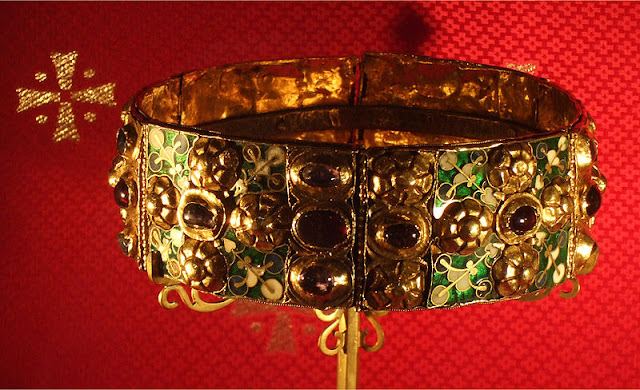 On this day in 1647, in Hartford, Connecticut, Alse Young becomes the first person to be executed as a witch in the British American colonies. She had a daughter, Alice Young Beamon, who would, herself, be accused of witchcraft in nearby Springfield, Massachusetts, 30 years later. Fortunately, she would not suffer her mother's fate. As was often the case, Alse Young was a woman without a son when the accusation of witchcraft was lodged, which implied that she would be eligible to inherit her husband's estate upon his death. Young's execution took place a full half-century before the far more infamous "witchcraft panic" at Salem, Massachusetts.

On this day in 1805, everybody's favorite world-beater Napoléon Bonaparte assumes the title of "King of Italy" and is crowned with the Iron Crown of Lombardy in Milan's gothic Duomo di Milano cathedral. The crown (see above) is said to have been forged from a nail taken from the True Cross. Personally, I think it's god-awful looking.

On this day in 1908, At Masjed Soleyman in southwest Persia (in modern-day Iran), the first major commercial oil strike in the Middle East is made. The rights to the resource are quickly swept up by the Anglo-Persian Oil Company, which, in 1935, would be re-named the Anglo-Iranian Oil Company, which, in 1954, would be re-named British Petroleum. This nomenclatural erasure of one side of the "partnership" could well serve as a telling short-hand for the long, sad story of the West's petro-political dealings with Iran. Oil and its commercial exploitation are, without a doubt, key linchpins to developing a holistic understanding of the parapolitical 20th century (and beyond).

On this day in 1930, America's Supreme Court rules that purchasing booze does not violate the Constitution. Kindly insert your own anti-marijuana-prohibition comment here.

On this day in 1938, the House Un-American Activities Committee or HUAAC begins its first session, to investigate alleged disloyalty and subversive activities on the part of private citizens, public employees, and those organizations suspected of having communist or fascist ties. Soon, they were grilling members of the Federal Theater Project over the political ties and activities of the various writers, directors, actors, dancers and artisans who helped put together those shows. The hearings went on for months. Meanwhile, the committee decided against opening investigations into the Ku Klux Klan, because, as committee member John E. Rankin (D-MS) remarked: "the KKK is an old American institution." How right he was.