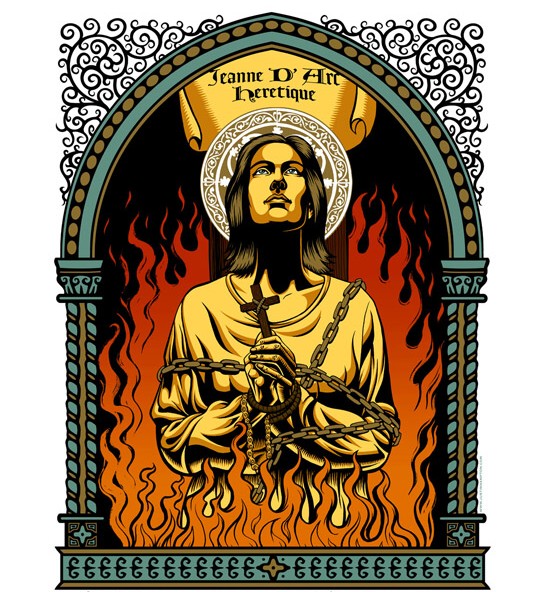 On this day in 1431, in Rouen, France, shortly after being captured by Burgundian troops in the English-occupied French region then known as Compiègne, the virgin-warrior "Maid of Orleans", Joan of Arc, is burned at the stake as a heretic. She was only 19 years old, but in the two years that she'd led a devoted army of rugged warriors to numerous impressive victories in the name of the Charles Dauphin (whom she lived to see crowned King of France), she had managed to transform the Hundred Years War into a religious war, terrifying superstitious English soldiers and inspiring French warriors to the point of fanaticism... which made her brutal execution all the more devastating to her many devoted admirers. Twenty-five years after her execution, an Inquisitorial court authorized by Pope Callixtus III examined the trial, pronounced her innocent and declared her a martyr. Joan was beatified in 1909, and canonized in 1920... Saint Joan, Patron Saint of France. Some modern historians think Joan fell prey to a plot by the very King Charles she'd helped to crown, because he wanted to make a deal with the Burgundians while she favored destroying them, militarily. It's impossible to know for sure at this point, but it does make for one hell of a story, that's for sure.

On this day in 1778, renowned French philosopher and author François-Marie Arouet - better known as Voltaire - passes away at the tender age of 84. He is still widely read today, and his works still have the power to amuse, inspire, and offend, in equal measure. I recommend Candide, in which he rails hilariously against the naive philosophical optimism of Jean Jacques Rousseau and Leibniz.

On this day in 1972, in Tel Aviv, Israel, members of the Japanese Red Army carry out the Lod Airport Massacre, killing 24 people and injuring 78 others, leaving everybody scratching their heads, wondering what in the high holy FUCK kind of gripe those Japanese goofs could possibly have against the Jews, anyway?!
Posted by Jerky LeBoeuf at 3:00 AM