SYNCHRONICITY... IT HAPPENED TO ME!

On Friday, February 15, 2013 - one day after the 1-in-100,000,000 odds simultaneous asteroid fly-by and Russian meteor show - my friend and co-blogger Albert V paid yer old pal Jerky a visit. After helping set up my new computer/scanner/printer, which was generously donated by a former employer, we decided to take a break and listen to FineArtStream.com, which features 24/7 streaming audio of Coast-to-Coast AM, a popular conspiracy and "alternative views" type radio program hosted by Art Bell. The show is something of an obsession with Albert, who listens to it constantly, is always talking about it, and harbors ambitions of one day becoming "the new Art Bell".


Here's the thing about Coast-to-Coast AM... over the span of 20-plus years, Bell often produced up to 7 3-to-4 hour programs each week. This means that - conservatively speaking - there are upwards of 23,000 HOURS worth of programming from which the Fine Art Stream archivists can pick and choose on any given day.  Just keep that in mind.

So there we were, Albert and I, sitting back and enjoying a well-earned break of Il Paesano pizza and talk radio when Bell takes a call from somebody asking if he'd heard anything about an entire town in the American southwest disappearing into thin air.

It was an odd story, but that wasn't what caught my attention. It was the caller's voice.

Albert is an adult student, and he's working towards his Bachelor of Arts here in Toronto. He'd been regaling me with stories about his classmates' youthful exploits when I felt compelled to interrupt him.

"Albert," I said. "Hold on... don't you notice something odd about this caller?"

Albert paused and listened in silence.

And indeed it was. Believe it or not, Dear Reader, the caller on the phone with Art Bell in that decades-old rerun of Coast-to-Coast AM was, unmistakably, none other than my friend and guest, Albert! Albert, who - over many years of obsessive listening and calling in - had succeeded in doing so only a small handful of times; less than a dozen, by his estimate.

So... what are the freakin' odds?! I assume they're slim - though certainly not as slim as those of the previous day's celestial fireworks display. And yet, still, I can't help but wonder what it might possibly mean, this strange coincidence. Was it a sign that Albert could one day achieve his goals, thus donning the mantle of America's premiere late-night conspiracy-and-UFO-obsessed media personality? Frankly, I have no idea. Robert Anton Wilson might have had something worth saying on the topic. Unfortunately, he's dead.

The bottom line, I suppose, is that these things happen. People win lotteries, get hit by lightning - sometimes on multiple occasions. Letters mailed decades ago get delivered. Frogs rain down from the clear, blue sky. And somehow it all evens out in the end. I mean, after all, this isn't the first crazy coincidence I've ever experienced. It isn't even the craziest. That honor goes to the time my old friend Jon P picked up a couple hitchhikers while long-haul trucking across Pennsylvania or someplace, only to soon work out that they were classmates of mine from college! And I went to school hundreds of miles away from home! Now that flipped yer old pal Jerky's wig, right proper!

Now if you'll kindly excuse me, I'm off to buy an armload of scratch-and-win tickets.
Posted by Jerky LeBoeuf at 1:30 AM No comments:

Email ThisBlogThis!Share to TwitterShare to FacebookShare to Pinterest
Labels: synchronicity

AND ON THE DAY THE POPE RESIGNS... 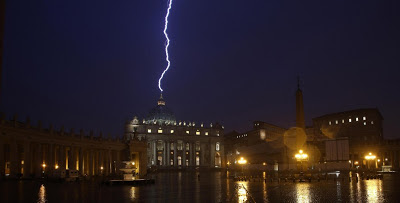 Saint Peter's Basilica is struck by lightning. Within hours of the announcement.