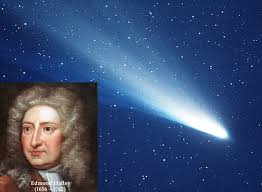 On this day in 1152, King Henry II of England marries Eleanor of Aquitaine, an incredibly fascinating world-historic person in her own right.

On this day in 1804, Napoleon Bonaparte is proclaimed Emperor of the French by the French Senate, which kind of flies in the face of the ideals behind the entire Revolutionary Project, but whatever.

On this day in 1896, a mass panic on Khodynka Field in Moscow during the festivities of the coronation of Russian Tsar Nicholas II on the day of his 28th birthday results in the deaths of... hold on, can this be right? 1,389 people?! Sheez, that must have been some serious-ass panicking!

On this day in 1910, the Earth passes through the tail of Halley's Comet. Despite many contemporaneous prophecies to the contrary, life as we know it does not cease to exist right then and there.

On this day in 1927, 45 second-to-sixth graders are killed and 58 more are wounded when a huge cache of explosives planted by anti-tax activist Andrew Kehoe explodes beneath a school in Bath, Michigan. It took Kehoe a year to plan his atrocity, and months to pack the school full of explosives which he then detonated remotely, herding his victims for maximum carnage, before blowing up his own shrapnel-packed car with himself inside it. He even issued a number of vague threats before doing the dirty deed, but nobody caught on.

On this day in 1944, the Soviet Union exiles more than 200,000 Tartars from Crimea because they were collaborating with the Nazis. And to think… the only thing the USA did with their Nazi collaborators - Preznit Dubya's grand-daddy being chief among them - was give them a slap on the wrist and hand their descendants the keys to the White House. It's kind of funny, in an utterly fucking disgusting kind of way.

On this day in 1974, India becomes the sixth nation in world history to explode an atomic bomb... not counting Atlantis.

On this day in 1980, Mount Saint Helens erupts, gushing forth billions of gallons of volcanic ash, killing between 57 and 65 people (depending who you ask) and blasting away a huge chunk of the mountainside.

On this day in 1995, a crystal-meth-addicted, half-psychotic, authority-hating Army vet named Shawn Nelson steals an M60 Patton Tank from a National Guard base in San Diego and goes on a rampage, destroying cars, fire hydrants and other property before being gunned down by police after getting stuck on a median. 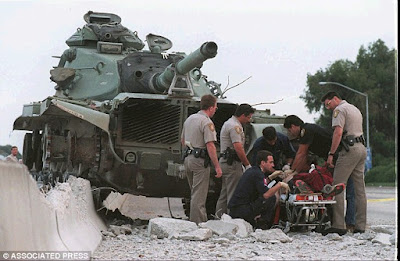