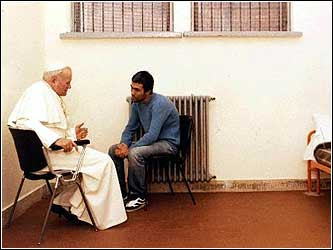 Okay, this one is a little confusing, so try to stay focused.

In the 1970s, a group of far-right-wing Turks formed an anti-Soviet/anti-American terror group called the Gray Wolves. The Wolves were responsible for hundreds of murders. One of their members was Mehmet Ali Agca.

In 1979, Agca was arrested for killing a liberal newspaper editor, but escaped from prison while awaiting trial. He left behind a note declaring his intent to kill Pope John Paul II if the Pontiff didn't cancel his long-planned good-will trip to Turkey. Security was tightened, and the Pope survived his visit to the Muslim nation. So far, so good.

On May 13, 1981, Agca sneaked into Italy, walked into St. Peter's Square during the weekly Papal audience and shot the Pope four times with a 9mm Browning automatic. Agca was wrestled to the ground and the Pope was rushed to hospital where he underwent five hours of emergency surgery.

Four days later, the Pope forgave Agca. Three weeks later, JPII left the hospital after making a full recovery. In July of that same year, Agca was sentenced to life in prison.

In 1982, Agca claimed that he was merely a patsy in a KGB plot, arranged through the Bulgarian intelligence service, to assassinate JPII for his strident anti-communist rhetoric.

In 1983, JPII visited Agca in the Italian prison where he was serving out his sentence. Soon after, Italian military police interrogated the would-be assassin to learn more about his conspiracy theory. This lead to the arrest of three Bulgarians and three Turks.

In 1985, these six men went on trial for plotting to assassinate the Pope. Just as the trial was getting underway, Agca stood up and declared himself to be the second coming of Jesus Christ, and predicted the imminent end of the world. He further declared that the KGB plot story was created by "Western intelligence agents" as an excuse to smear the USSR in strongly Catholic South America, where communism was gaining popularity.

Furthermore, Agca claimed that God had told him to shoot JPII, as was foretold in the (still secret at that time) Third Prophecy of Fatima.

Needless to say, charges were dropped and the trial was called off.

However, there remain a few intriguing coincidences… or should we say synchronicities?

First of all, it is true that Acga’s attempt on JPII’s life occurred on the 64th anniversary of the first Marian apparition in Fatima, Portugal, where the Virgin Mary allegedly gave three prophecies to some simple country girls in 1917. This was something that not many commentators remarked upon before Acga, himself, brought it up.

And then there’s the issue of JPII’s visit to Fatima, 19 years after Agca's assassination attempt… a visit that was built up as being a public revelation of the long-held secret of the Third Prophecy of Fatima.

Here’s a rundown for the uninitiated. The first prophecy allegedly foretold World War II. The second predicted the rise and fall of communism. The third prophecy, which had been kept secret by the Vatican since the day it was issued, had long been thought to be a horrifying prediction of nuclear Armageddon. And now, here it was, 83 years later, and the Pope was promising to spill the beans!

So… what was it, exactly, that the Blessed Virgin Mary had revealed to those three humble shepherd girls all those years ago?

Hold on to your hats, dear reader, because according to the Pope, it turns out Agca was right! The Third Prophecy was a vision of "an attempted assassination of a Pope!" Move along now! No need to worry anymore! There's nothing to see here!

Of course, Catholics the world over tried in vain to hide their disappointment. All those years of secrecy and intrigue, all that dark speculation, and for what? The anticlimax of it all seemed like kind of a rip-off… or maybe a cover-up?

Because, interestingly enough, this "revelation" by the Vatican forces believers to accept one of two equally disturbing scenarios. Either the Vatican reverse engineered a cover story about the Third Prophecy in order to help hide something (say, a failure of prophecy, or something too horrible to reveal), or Agca really is the second coming of Christ, thereby explaining how he knew the contents of the closely guarded Third Prophecy of Fatima!

In any case, Agca was pardoned by Italy in 2000, and was sent to Turkey to serve out the remainder of his sentence for killing that newspaper editor. In 2008 Agca sent a letter to Pope Benedict warning him to stay away from Turkey if he knew what was good for him. Ratz went ahead with his Turkish trip, and it went off without a hitch.

Turkish authorities released Agca from prison in 2010, and he has so far managed to keep a lid on the voices in his head. Only time will tell, however, if he's done providing us with fodder for our collective parapolitical mills.
*** 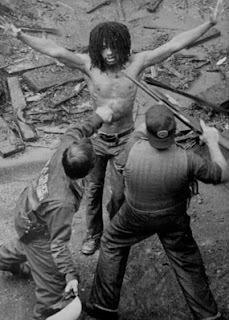 Also on this day, in 1985, Philadelphia police and federal lawmen launch a full-scale military assault on the rowhouse occupied by the black, left-wing religious cult called MOVE. They use tear gas, shotguns, Uzis, M-60 machine guns, a 20mm anti-tank gun, and a .50-caliber machine gun, firing over 10,000 rounds at the house knowing there are women and children inside. When these measures don’t succeed in driving MOVE from the building, a state police helicopter drops a bomb on the roof. This starts a fire that officials allow to burn, eventually destroying the entire block of 60 homes. Eleven people perish in the conflagration. Although a 1986 report denounced the actions of the city government, stating that "Dropping a bomb on an occupied row house was unconscionable", no one from the city government was charged criminally for the actions taken by police that day.
Posted by Jerky LeBoeuf at 3:00 AM