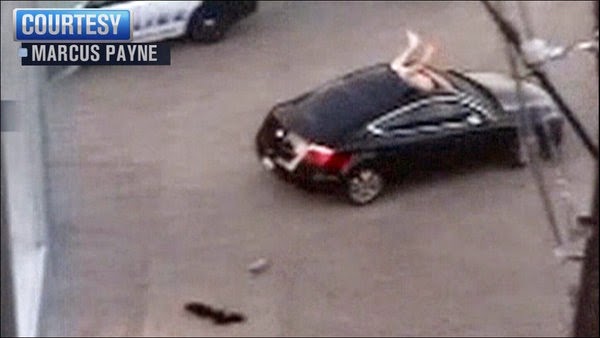 The newswires are all abuzz of late with tales of seemingly deranged folks - mostly men at this point - doffing their duds and going on rampages of varying degrees of ferocity, always in public, and often on video.

Perhaps the most widely-disseminated of these stories is this one about the naked man who stormed the White House, claiming he had a three o'clock appointment with the Commander in Chief, President Obama, himself.

Slightly more distressing and less amusing are two recent incidents that were both caught on video. First, there's this story about an as yet unidentified naked man who, without apparent provocation, attacked a woman at a busy Los Angeles intersection in broad daylight. Then there's this story about Nicholas Dyll, in Dallas, who stripped off his clothes then dove through the open sunroof of a car in order to get at the female driver cowering in terror within. He's been charged with aggravated assault.

But that's not all! There's also this story about a naked man attacking police officers in Omaha, Nebraska. And this story about a man showing up at a courthouse in Portland, Oregon, stripping down to nothing and playing his violin in some sort of protest. Then there's this dude who was arrested for trying to "nest in a tree" whilst naked, and this North Carolina man who attacked a high school student, again, whilst naked.

A big head's up and thanks to the folks at the Rigorous Intuition discussion boards who noticed this trend and cooperatively collated all of these different stories from across the fruited plain. This post is essentially a total rip of all their good work. Sorry guys, I couldn't resist!
Posted by Jerky LeBoeuf at 2:34 AM 1 comment:

Tom McKay over at FilmsForAction.com has this disturbing report about the soon-to-be-upon-us collapse of all civilization to share with us. It begins thusly...


Civilization was pretty great while it lasted, wasn't it? Too bad it's not going to for much longer. According to a new study sponsored by NASA's Goddard Space Flight Center, we only have a few decades left before everything we know and hold dear collapses. The report, written by applied mathematician Safa Motesharrei of the National Socio-Environmental Synthesis Center along with a team of natural and social scientists, explains that modern civilization is doomed. And there's not just one particular group to blame, but the entire fundamental structure and nature of our society.

Anyhoo, you can read more at the link... if you feel you need to. All this doomy-doom-doom talk is starting to sound a little Old Hat to me.

Posted by Jerky LeBoeuf at 9:29 PM No comments: