THE PSEUDO-SACRIFICIAL "SLUTTING" OF HANNAH MONTANA

By now, you've all probably heard about the controversy surrounding Miley Cyrus' performance of her already controversial single, "We Can't Stop", at the 2013 MTV Video Music Awards. Also controversial was the video for the single, which was expertly dissected by CollegeHumor.com in their excellent music-free version. So I suppose Sunday's VMA performance means that Cyrus has scored a controversy hat-trick, triple play or trifecta, depending on your choice of sports analogies.

For all of you not living in the USA, which means you're currently unable to access the performance due to MTV.com's anal-retentive region blocking policies, here is a Youtube version that at least lets you see what all the fuss is about. I don't know how long it will be up, though, as others have been removed already tonight:

For those of you whose delicate constitutions prevent you from watching an ostensible human being completely and utterly debase herself in a doomed attempt to acquire whatever wispy shreds of "street cred" she can dig her manicured little claws into, Buzzfeed provides a countdown of what they consider to be the "weirdest and craziest moments" from the performance. I think they make some great observations, but they missed a few.

Hence this expanded Useless Eater Blog post, in which I will attempt to catalog every element from this performance, offering occasional attempts at analysis and interpretation... though I must confess that I mostly found it baffling.

2. As if emerging from a giant Teddy wasn't enough, Cyrus is also wearing a teddy... WITH THE FACE OF A TEDDY BEAR ON IT! Once again, she hits a hat-trick/triple-play/trifecta.

3. The face of the Teddy on Cyrus' flimsy teddy has its tongue sticking out, just as Cyrus does while she clumsily makes her way down the steps towards the stage. 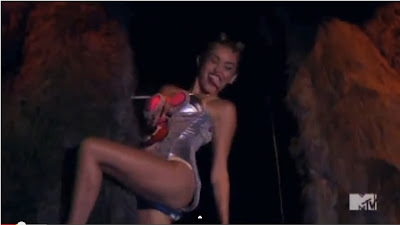 4. For some reason, Cyrus' hair is done up to look like a couple of horns have sprouted from the top of her skull. Oh, and MTV decided to censor the word "molly" from her lyrics, as it appears to be a not so subtle reference to the rave drug MDMA.

5. At one point, Cyrus pretends to stroke her long, waving hair... despite the fact that she's sporting a Pixie cut. She almost appears to be in a hypnotic trance of some sort, like she's going through the motions of some programming that was installed in her psyche at a time when she had enough hair to pull off such a move. It's actually kind of disturbing. My Facebook friend Adam Gorightly wondered if perhaps this performance was the revelation of Hannah Montana's mind-control "alter", and called her performance "Illuminaughty!"

6. Cyrus displays an extremely odd gait as she crosses the stage, her bizarre crotch thrusts and air-humping not unlike the visual equivalent of uncomfortable fuck-grunts.

7. Throughout the performance, Cyrus is constantly “spanking” her vagina for some reason.

8. She is joined on stage by a circle of sad, dopey looking pink and white dancing Teddy Bears.

9. A handful of Black back-up dancers walk clumsily onto the stage with giant Teddy Bears of their own strapped to their backs for some reason. One of these dancers - a giant, frowning Negress who happens to have a spectacular badonk-adonk - begins throwing candies (or is it condoms?) into the audience with barely concealed contempt.

10. Oh my. Now Cyrus has begun wagging her fanny with all the passion and verve of a homeless geriatric splattering the sidewalk just steps from your favorite Chinatown restaurant with hot gutfuls of Lysol-scented vomit. I believe the kids call this abomination "twerking".

11. The "twerking" is alternated with that idiotic "invisible rainbow" move that so many musical acts seem to think is cool these days, even though I believe it originated with the Backstreet Boys.

12. Cyrus' dancing is completely off tempo. She appears to be drunk or, as previously contemplated, hypnotized.

13. What is up with the constant crotch pointing, slapping, spanking, etc, etc, etc?!

14. At one point, Cyrus appears to feign anilingus on the aforementioned candy-throwing Negress with the titanic mega-booty. More spanks and crotch-pointing ensue. 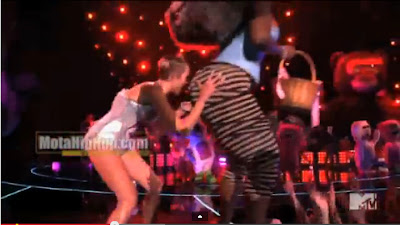 16. Every once in a while, the Teddy Bear on Cyrus' teddy looks like the notorious Illuminati Eye. It's formed by the bear's black nose and white muzzle, with the tongue creating an eyelid effect. I know, I know... 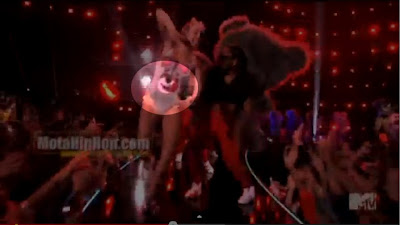 17. At this point, Robin Thicke shows up wearing a referee costume and they perform a duet, segueing into Thicke's own summer succès de scandale, "Blurred Lines". It's at this point that Cyrus rips off her teddy, stripping down to her underwear and a giant We’re Number One.foam finger hand.

18. Godzilla save us... we are subjected to EVEN MORE "twerking".

19. Cyrus uses the giant foam finger/hand exactly the way you'd expect her to use it if you've been reading along until now. 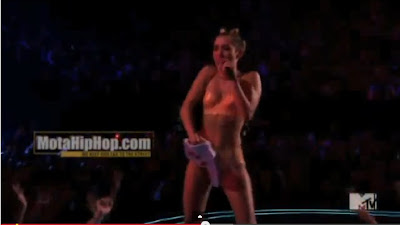 20. The finger, by the way, has a red tip that’s supposed to be a painted fingernail, but which looks to me more like it’s been smeared with menstrual blood... which, considering Cyrus' state of undress and how many times she slides it over and across her vagina, would not be beyond the realm of possibility. 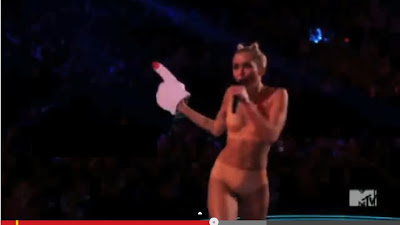 20. Two rappers show up. I have no idea who they are, but they bring even MORE women with them. This time, however, instead of Teddy Bears, the girls are holding up cheap cardboard cut-outs of status symbols like a Rolex watch, a painting by Picaso, a yacht, a champagne bottle, etc, etc, etc.

21. The first rapper is dressed in white and black, looking kind of like an up-town Baron Samedi Dimanche, of Voodoo infamy. The other rapper is dressed in a hockey jersey with the number 777 emblazoned across his chest. That number has a great many potential interpretations, mostly dealing with perfection of some sort, which makes its inclusion here completely incomprehensible. 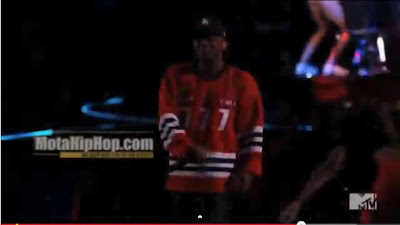 And then the whole thing ends rather flatly and pathetically... a study in anti-climax. The audience seems split between those who are bored out of their minds and those feeling genuine embarrassment and pity for the poor girl. Can anyone possibly hate their parents that much?

After a few viewings, some questions lingered in my mind. First of all, what was up with all the Teddy Bear imagery? I brought up the issue on Facebook and I'd like to give a shout-out to my fellow psycho-sleuth Drakonas T. who wrote: "I'll TELL you how the Teddy Bears fit into all of this..." and then posted this image:

Of course! I could hardly believe I hadn't thought of that, myself! So thanks, Drak, for bringing up an incredibly important issue at this point, and in this context.

Because, who is Miley Cyrus, exactly, if not for Hannah Montana? And when you consider how intensely the Hannah Montana persona/brand was pushed on the "tween" demographic, on an international level and on a historically unprecedented scale, by Disney - which, just to refresh your memories, is one of the most important players in the Military-Industrial-Intelligence-Media-Entertainment Complex - it kind of makes you wonder what that courtship was really all about, does it not?

What is it, exactly, that these kids are supposed to take away from Sunday night's utterly bizarre and depraved debacle?

I ask you, my fellow citizens... WHO, OH WHO WILL THINK OF THE CHILDREN?!?!

The answer, of course, is the Military-Industrial-Media-Intelligence-Entertainment Complex.
Posted by Jerky LeBoeuf at 1:18 AM 8 comments:

ATTENTION! THERE ARE SERIOUS PROBLEMS WITH XEROX OFFICE MACHINES!

If you are in a workplace that depends on the proper functioning of Xerox office equipment, then you had better read this damning report about how using the compression settings, even at the highest resolutions, can lead to the random switching around of numbers, which in turn can have potentially deadly consequences, for instance, in medicine, engineering, the pharmaceutical industry and more.
Posted by Jerky LeBoeuf at 10:17 PM No comments:

ADAM CURTIS ON THE GHOSTS IN OUR LIVING ROOM

Around Christmastime 2011, noted British documentarian Adam Curtis - who has brought us such essential viewing as The Power of Nightmares, The Trap, The Century of Self and All Watched Over by Machines of Loving Grace - put together an elaborate post over at his BBC blog in which he examined the history of television reporting on supposedly supernatural entities and events.

Here is ... a brief history of the appearance of ghosts and poltergeists and other spirits on television. Not fictional ghosts - but real ones, or the reports of their appearances, that you find in various news and documentary programmes. But as so often when one looks at material in the archives, it turns out that it tells you less about the subjects of the programmes - the ghosts - than about the strange medium that possesses modern society - television.

As is the norm with Curtis's work, his blog post is meticulously researched, chock full of archival material, generously illustrated, endlessly fascinating and surreptitiously profound. I urge you all to read the whole thing, watch all the embedded videos, and even peruse the articles and research papers to which Curtis links throughout the piece.
Posted by Jerky LeBoeuf at 9:25 PM No comments: 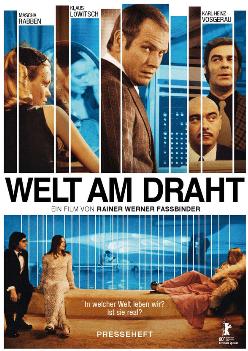 Based on the 1964 cybernetics-themed sf novel Simulacron-3 by Daniel F. Galouye, the videos below feature both parts of the 16mm film version directed by legendary German director Rainer Werner Fassbinder for German TV, called Welt am Draht. Both parts come with English subtitles.

Posted by Jerky LeBoeuf at 7:27 AM No comments: