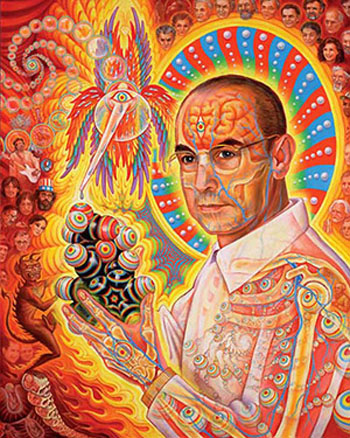 On this day in 1938, while researching drugs to improve blood circulation and prevent geriatric disorders, chemist Albert Hoffman first manufactures LSD (lysergic acid diethylamide) for Sandoz Labs in Switzerland. It will be five years before he accidentally ingests any of the wonderstuff, himself, after which he will write: "Last Friday, I was forced to interrupt my work in the laboratory in the middle of the afternoon and proceed home, being affected by a remarkable restlessness, combined with a slight dizziness. At home I lay down and sank into a not unpleasant intoxicated-like condition, characterized by an extremely stimulated imagination. In a dreamlike state, with eyes closed, I perceived an uninterrupted stream of fantastic pictures, extraordinary shapes with intense, kaleidoscopic play of colors. After some two hours this condition faded away." Cue the sitar music and turn on the lava lamps! Here are some other people's trip stories.

On this day in 1932, ten weeks after his abduction and following one of the most torturous and multiply-botched criminal investigations in legal history, Charles Junior, the infant son of aviation pioneer and avid Nazi-supporter Charles Lindbergh, is found dead in Hopewell, New Jersey, a few miles from the Lindbergh home.

On this day in 2002, former US President Jimmy Carter arrives in Cuba for a 5-day visit with Fidel Castro. He was allowed to address the Cuban public uncensored on national television and radio with a speech that he wrote and presented in Spanish. In the speech, he called on the US to end "an ineffective 43-year-old economic embargo" and on Castro to hold free elections, improve human rights, and allow greater civil liberties. From a parapolitical perspective, it would have been supremely interesting to hear what these two had to say to each other during their private conversation.

On this day in 2008, an earthquake measuring around 8.0 magnitude shook China's Sichuan region to bits, killing over 69,000 people... and you probably don't even remember, considering the accelerated rate at which feces are colliding with propeller on every conceivable level these days.
Posted by Jerky LeBoeuf at 3:00 AM