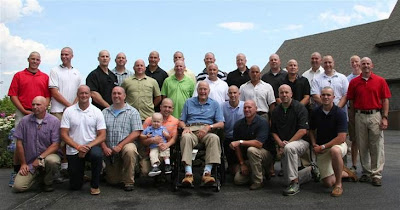 George Herbert Walker “Poppy” Bush – former United States President and Capo di Tutti Capi of the much-feared Bush Crime Family – has been enjoying a lot of good press recently, raking in the accolades for shaving his head along with his huge platoon of Secret Service agents after one of their own had a child fall ill with cancer.

Frankly, he probably deserves all the good press that this gesture has gotten him. I mean, after all, I’m sure all this shaving of heads – and God only knows what else – has absolutely nothing to do with the Bushes’ well-known sexual fetish for bald-headed men.

Because that would just be a completely batshit crazy thing for me to suggest, now, wouldn't it?
Posted by Jerky LeBoeuf at 9:20 PM No comments:

According to this Reuters article by Jim Finkle, famed super-hacker Barnaby Jack...

...a celebrated computer hacker who forced bank ATMs to spit out cash and sparked safety improvements in medical devices, died in San Francisco, a week before he was due to make a high-profile presentation at a hacking conference. The New Zealand-born Jack, 35, was found dead on Thursday evening by "a loved one" at an apartment in San Francisco's Nob Hill neighborhood, according to a police spokesman. He would not say what caused Jack's death but said police had ruled out foul play. The San Francisco Medical Examiner's Office said it was conducting an autopsy, although it could be a month before the cause of death is determined.
Jack was one of the world's most prominent "white hat" hackers - those who use their technical skills to find security holes before criminals can exploit them. ... Jack had planned to demonstrate his techniques to hack into pacemakers and implanted defibrillators at the Black Hat hackers convention in Las Vegas next Thursday. He told Reuters last week that he could kill a man from 30 feet away by attacking an implanted heart device.

Much more at the link, but you get the general gist.

Posted by Jerky LeBoeuf at 9:44 PM No comments:

Email ThisBlogThis!Share to TwitterShare to FacebookShare to Pinterest
Labels: Assassinations, computers, Conspiracy in the News, hackers

WHO IS BEHIND THE "SEASTEADING" MOVEMENT?

Just over three years ago, Alternet published a very interesting article, authored by Mark Ames, which explored the personalities behind the ongoing attempts to actualize the longstanding science-fiction dream of escaping burdensome taxes, regulations, and moralistic prohibitions - not to mention the teeming, unwashed masses - by heading out to sea on giant, floating, libertarian cities. The best part about this article? Ames doesn't shy away from naming names.


What happens when Americans plunder America and leave it broken, destitute and seething mad? Where do these fabulously wealthy Americans go with their loot, if America isn't a safe, secure, or even desirable place to spend their riches? What if they lose faith in their gated communities, because those plush gated communities are surrounded by millions of pissed-off Americans stripped of their entitlements, and who now want in? We finally have the answer, and you're not going to like it: a new fleet of castles that float in the oceans. The super-wealthy are already building their first floating castle, a billion-dollar-plus luxury liner that offers permanent multimillion-dollar housing with the best protection of all: moats made of oceans, keeping the land-based Americans they've plundered at a safe distance.

So click on through to catch a frightening glimpse of the collective fantasy being dreamed into reality by such aquatic would-be John Galts as blood-soaked Bush Crime Family bag-man Frank Carlucci, libertarian icon Milton Friedman's perverted grandson Patri, and bizarre right-wing PayPal founder, Peter Thiel, always keeping in mind that you most definitely are not going to be invited along for the ride.
Posted by Jerky LeBoeuf at 12:15 AM No comments:

CONSPIRACY BELIEVERS FOUND TO BE "SANER" THAN SKEPTICS

That is the thrust of a recent Pak Alert Press story, which highlights a number of "recent studies by psychologists and social scientists in the US and UK" that suggest that, contrary to mainstream media stereotypes, "those labeled conspiracy theorists appear to be saner than those who accept the official versions of contested events." The article continues:

The most recent study was published on July 8th by psychologists Michael J. Wood and Karen M. Douglas of the University of Kent. Entitled “What about Building 7? A social psychological study of online discussion of 9/11 conspiracy theories,” the study compared “conspiracist” (pro-conspiracy theory) and “conventionalist” (anti-conspiracy) comments at news websites. The authors were surprised to discover that it is now more conventional to leave so-called conspiracist comments than conventionalist ones: “Of the 2174 comments collected, 1459 were coded as conspiracist and 715 as conventionalist.” In other words, among people who comment on news articles, those who disbelieve government accounts of such events as 9/11 and the JFK assassination outnumber believers by more than two to one. That means it is the pro-conspiracy commenters who are expressing what is now the conventional wisdom, while the anti-conspiracy commenters are becoming a small, beleaguered minority.

Read the rest of this intriguing article at Pak Alert Press...
Posted by Jerky LeBoeuf at 10:47 PM No comments: