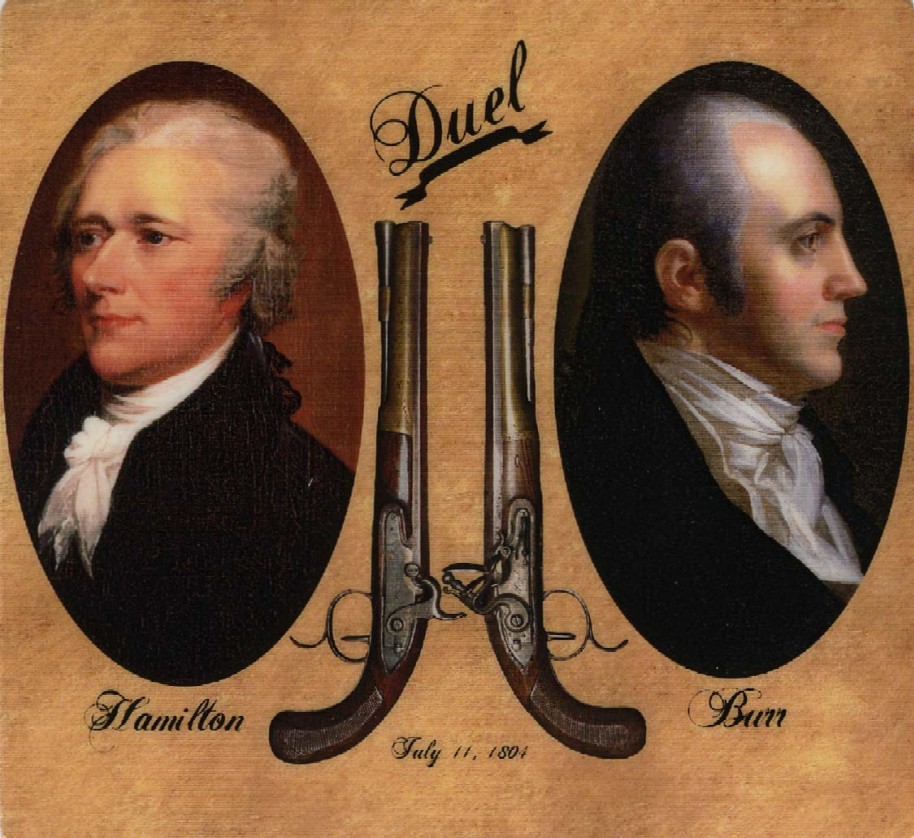 On this day in 1804, after decades of getting up each other's asses and for reasons far too complicated to get into here, Founding Father Alexander Hamilton and then-Vice-President Aaron Burr meet at the Weehawken, New Jersey dueling grounds at the crack of dawn to settle their differences at the end of a pair of pistols. What happened next depends entirely upon which eye-witness you choose to believe. Either Hamilton, in a poorly-timed attempt to prove himself a gentleman, fired into the air only to be shot square in the gut by Burr immediately afterwards, or else he simply took his shot and missed, leaving Burr to offer up a more accurate and deadly rebuttal. Whichever scenario is closest to the truth, the end results remain the same: Alexander Hamilton - the genius confidante of George Washington, the man who designed America's economic framework - was dead, and Aaron Burr's reputation as a vicious, villainous brute was firmly established. Now persona non grata, Burr and some foreign belligerents began formulating a plan to conquer Mexico - which, at the time, covered much of the South and Southwest - in order to set up a separate, independent, competing state. After being acquitted of treason, Burr kicked around Europe for a while, leaving a trail of angry creditors wherever he went. He eventually returned to the United States and lived long enough to witness the Texas Revolution, about which he mused: "What was treason in me thirty years ago, is patriotism now." Then he died.

On this day in 1889, the Mexican city of Tijuana is born. Three days later, the place is declared a poverty-stricken tourist trap with an unwholesome fixation on the donkey, Mexico's national beast of burden.

On this day in 1895, the Lumière brothers demonstrate film technology to scientists.

On this day in 1921, Mongolia gains its independence from China. Considering the serious developmental difficulties that come with that extra chromosome of theirs, you have to admit that's pretty impressive.

On this day in 1921, former U.S. President William Howard Taft is sworn in as 10th Chief Justice of the US Supreme Court, becoming the only person to ever be both President and Chief Justice.

On this day in 1955, Congress authorizes all American currency to be printed with the motto: "In God We Trust." Unfortunately, they left off the funnier half: "All others pay cash." But seriously, it behooves us to recall that these four words were added to American money - along with the words "Under God" to the Pledge of Allegiance - at the behest of the Roman Catholic Knights of Columbus fraternal order. Not in 1776. Not in 1855. Not even in 1900... but in 1955. Ten years after the end of World War II. The year President Eisenhower sent the first American troops to Vietnam. The year of the first McDonald's restaurant, and Bill Haley's Rock Around the Clock. In other words, it was a knee-jerk addition based on a passing fad, and the time has come to drop it.

On this day in 1979, the space station Skylab returns to Earth… the hard way.

The government of the United States awards the Reverend Dr. Martin Luther King, Jr. the Presidential Medal of Freedom on this day in 1977, roughly nine years after awarding him the Troublemaker's Bullet of Shut-the-Fuck-Up in Memphis, Tennessee. And that's a fact, Jack.
Posted by Jerky LeBoeuf at 4:00 AM