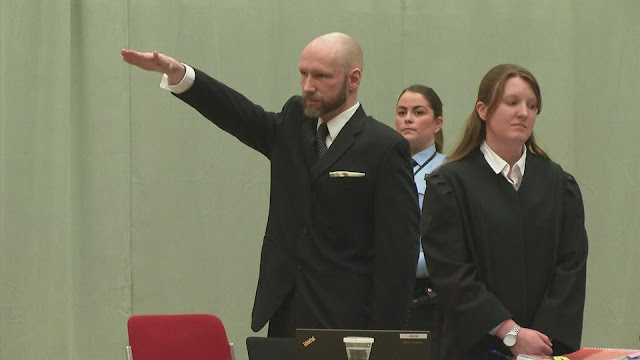 On this day in 1946, the Zionist underground terrorist organisation known as Irgun bombs the King David Hotel in Jerusalem, site of the civil administration and military headquarters for Mandate Palestine. 91 people, mostly British diplomats and their wives and children, are killed. It remains the worst act of terrorist bombing in the modern history of Palestine/Israel.

This day is a bad day for bad guys. It was on this day in 1934 that John Dillinger was gunned down by FBI agents outside Chicago's Biograph Theatre. Also on this day, in 1991, serial killer Jeffrey Dahmer was arrested after police found the remains of eleven men and boys in his Milwaukee apartment. And, finally, this day in 2003 saw Uday and Qusay Hussein's last stand. Saddam's boys had held off the 101st Infantry and Special Forces for days, holed up in a fortified compound, before planes were called in to bomb the hell out of the place and give Preznit Dubya a necrophiliac photo-op and another chance to claim, ridiculously, that America had "turned a corner" in Iraq.

This day was also a bad day for a not so bad guy in 2005, when London police chased Jean Charles de Menezes into a subway car and gunned him down in cold blood after allegedly mistaking him for one of the London Bombers, much to the delight of mentally ill FOX News on air "personality" (sic) John Gibson.

On this day in 2005, the last Buick LeSabre rolls off the assembly line. Over the last twenty years, yer old pal Jerky has owned two of these road-tanks, and loved them both.

On this day in the year 1988, fearing that any advances they make will eventually find their way into dangerous hands, a group of 500 American research scientists pledge to boycott any and all biological weapons development proposals sent their way by the Reagan administration. I wonder if even these thoughtful, forward thinking gentlemen could envision a day when the wrong hands would be their own.

On this day in 2011, psychopathic right-wing "Christian Identity" terrorist, wannabe Freemason, self-declared Templar, Islamophobic Cosplay enthusiast Anders Breivik sets off a bomb targeting government buildings in central Oslo, Norway, killing eight. He then makes his way to a youth camp taking place on the island of Utøya, where he kills an incredible 69 more people, the vast majority of whom are teenagers. The videos and manifestos subsequently put out by Breivik have left no doubt about the fact that Breivik is a pathetic narcissist with delusions of grandeur who deserves a hundred lifetimes of unremitting, round-the-clock torture. Too bad the maximum time he can serve in Norway's jails is... 21 years!??!
Posted by Jerky LeBoeuf at 3:00 AM