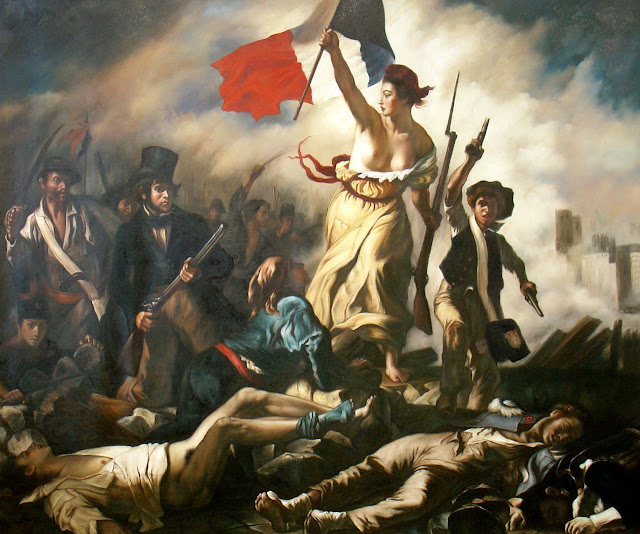 On this day in 1789, French citizens storm the Bastille in Paris. Yep, that's right... today is Bastille Day!

On this day in 1798, the Alien and Sedition Acts are signed into law by President John Adams, a member of the Federalist Party. Under this new set of laws, anyone "opposing or resisting any law of the United States, or any act of the President of the United States" could be thrown in jail. It was also illegal to "write, print, utter, or publish" anything critical of the President or Congress. Fortunately, Thomas Jefferson's Democratic-Republican Party promised to retract this law if elected, which they were in 1801, thus making this blog possible. Thanks, Tommy!

On this day in 1949, five years and one day after the USA explodes the first atom bomb in the New Mexico desert, the USSR explodes their own atom bomb. Goldurn copycats!

On this day in 1958, the monarchy of Iraq falls to a coup led by Abdul Karim Kassem, who becomes the nation's new leader. Not for long, however, as pretty soon another secular Arabist group - the Ba'ath Party -comes along and messes up his whole deal.

On this day in 1965, Mariner 4 takes the first close-up photographs of another planet: Mars! Personally, yer old pal Jerky has always been more interested in... URANUS!

On this day in the year 1966, a maniac by the name of Richard Speck ties up - then slowly tortures and kills - 8 student nurses in a Chicago dormitory. Years later, while serving a 400 year prison sentence, Speck videotapes himself snorting mounds of cocaine, felating his dusky prison lover, and showing off his disgusting, hormone-therapy-induced man-boobs for all the world to see. Everybody who's seen Speck's home movies usually agrees: the death penalty never looked so good.

On this day in 1976, capital punishment is abolished in Canada.

On this day in 1987, Lieutenant Colonel Oliver North concludes his Congressional testimony, during which he excretes enough nervous perspiration to float the Q.E. II and serves up enough baloney to feed every starving child in Africa. For his treason and lies before Congress, North was sentenced to life as a shitty right-wing radio host. Today, he barely pulls in six figures, the poor guy.

On this day in 2003, in an effort to discredit U.S. Ambassador Joseph C. Wilson, who had written an article critical of the 2003 invasion of Iraq, Washington Post columnist Robert Novak reveals that Wilson's wife Valerie Plame is a CIA operative.
Posted by Jerky LeBoeuf at 3:02 AM