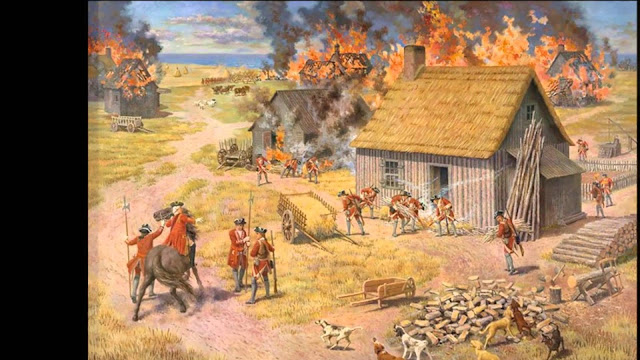 On this day in 1755, British governor Charles Lawrence and the Nova Scotia Council order the deportation of the Acadians. Thousands are sent to the British Colonies in America, France and England. Some later move to Louisiana, while others resettle in New Brunswick. That's what my ancestors did, anyway.

On this day in 1946, America's military scientists detonate the first ever underwater atomic bomb off the Bikini atoll. Meanwhile, in Paris, a new two-piece swimsuit makes its debut at a fancy-shmancy fashion show. It's name? The Bikini! Coincidence? YOU BE THE JUDGE!

On this day in 1965, folk singer Bob Dylan "goes electric" as he plugs in at the Newport Folk Festival, signaling a major change in folk and rock music. Some in the audience boo, but the world at large applauds. Figuratively speaking, of course.

On this day in 1976, the Viking 1 probe takes the famous Face on Mars photo.

On this day in 1984, Salyut 7 cosmonaut Svetlana Savitskaya becomes the first woman to perform a space walk!

On this day in 1990, US Ambassador to Iraq April Glaspie tells Iraqi leader Saddam Hussein: "We have no opinion on your Arab-Arab conflicts, such as your dispute with Kuwait. Secretary Baker has directed me to emphasize the instruction, first given to Iraq in the 1960's, that the Kuwait issue is not associated with America." Four days later, Iraq invades Kuwait. A few months later, the United States bombs Iraq. BWAH-HA-HA-HA!!! Suckers!

On this day in 1999, a conflagration - half barbarian self-affirmation, half banal suburban vandalism - erupts belch-like from the belly of a lost generation. The children of the seventies and eighties - the children of greed, selfishness and solipsism - have their Woodstock, and brother, it ain't pretty. Better to call it Altamont '99, or Woodstockalypse Now. It's pointless to compare the hellish negativity of Woodstock 99 with the benign goofiness of the one that came thirty years before, so why bother? There was public nudity at both events, sure, but the nudity of Woodstock 99 was confrontational, vile and pathetic... it stank of the peep-show booth. Look at me! Touch me! It's all about my tits and cock! Conservatives, of course, see in Woodstock 99 a confirmation of their prejudices. "You see?! THIS is what happens when you allow a counterculture to thrive!" But most of these kids were either born or raised during the greatest surge of social conservatism this nation has ever known. These kids who were setting fire to everything that would burn, these kids who were overturning cars, trucks and ambulances for the rush of it, these kids who looted concessions and sent merchants running for their lives, these are the bastard offspring of the dog-eat-dog, every-man-for-himself conservatism of Ronald Reagan and Margaret Thatcher. Brutal, narcissistic and numb. Woodstock is dead... long live Woodstock.

On this day in 2010, WikiLeaks publishes classified documents about the War in Afghanistan, one of the largest leaks in U.S. military history.
Posted by Jerky LeBoeuf at 3:00 AM