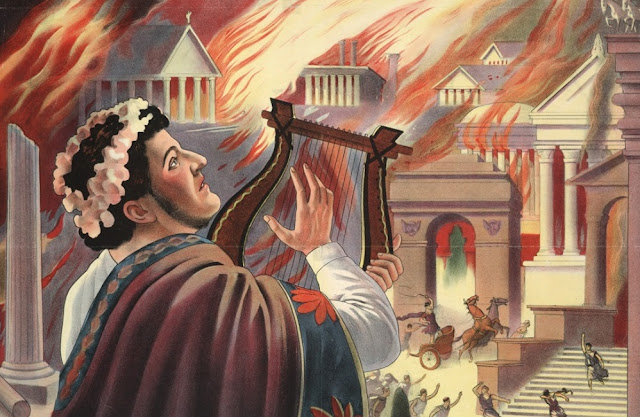 On this day in the year 64 AD, Emperor Nero gently strums his lyre and sings a tune while watching the city of Rome go up in smoke. Of course, this historical example of a disastrous failure of leadership has absolutely no parallels with Preznit Dubya's reaction to the Katrina disaster, because… um… because fire is, like, the total opposite of water. A-and Rome didn't have any Black people in it. Or at least not as much as New Orleans does. I mean did.

On this day in 1979, the Sandinista rebels overthrow the government of the Somoza family in Nicaragua, much to the delight of... well... UK punk rock group The Clash, for one.

On this day in 2001, a writer named James Howard Hatfield - author of the highly critical and controversial Dubya biography Fortunate Son - is found dead in an Arkansas hotel room, victim of an apparent "suicide". Hatfield's most contentious claim was that Dubya had been arrested on cocaine dealing charges back in the early seventies, and that Poppy Bush had to pull some major strings to get the charges wiped.
Yer old pal Jerky was a spectator of the Hatfield saga from pre-release buzz for his book, to the post-release controversy of its claims, to the attempts to assassinate Hatfield's character (unlike the individual he investigated, Hatfield had no way to wipe his criminal record clean), to the unprecedented mass burning of the original run, to the second printing by the courageous folks at Soft Skull Press, to the claim that Karl Rove was a source for the cocaine story, and eventually to the author's convenient hotel-room suicide. Shades of Danny Casolaro. Shades of Steve Kangas.

But no matter what one thinks of the author as a man, Fortunate Son remains a book about which respected social critic Mark Crispin Miller said: "If there's any future for American democracy, the trashing of Fortunate Son and its author will eventually stand out as an important early episode in the history of the Bush reaction." Your humble blogging friend concurs with Miller's assessment.
Posted by Jerky LeBoeuf at 3:00 AM