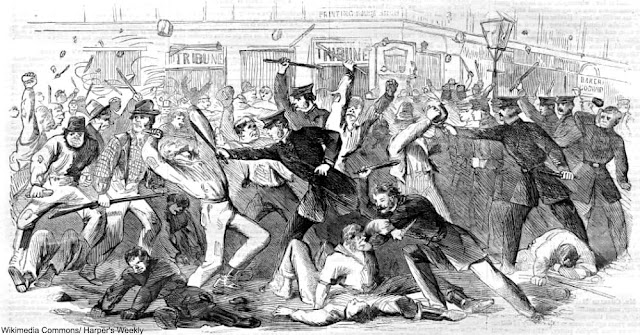 It was on this day in 432 B.C. that the Metonic Cycle originated. The Metonic Cycle is a period of 235 lunar months, or about 19 years in the Julian calendar, at the end of which the phases of the moon recur in the same order and on the same days as in the preceding cycle. Whoa, dude!

On this day in 1837, Queen Victoria moves into Buckingham Palace. In a nod to the commoners, she spends her first two months there cleaning the mess left behind by the previous tenants - "a right herd of swine", apparently - and living out of cardboard boxes.

On this day in the year 1863, a mob of mostly Irish workers, disgruntled with the fact that the government was drafting them to go off and fight a war for the Black Man, riot in the streets of New York City, burning down entire blocks, shooting cops and lynching blacks all the while. Eventually, the Union army had to be called in. Open fighting in the streets continued until July 16, with a total bodycount of well over one thousand dead… mostly rioters felled by army bullets. We'll be seeing this kind of thing again.

On this day in 1908, chicks compete in modern Olympics for the first time. Way to go, ladies!
***

On this day in 1917, the Virgin Mary appears to three children - Lucia, Jacinta and Francisco - at Fatima, Portugal, giving them three dire predictions: 1. The end of World War I. 2. the start of World War II. 3. An assassination attempt on the Pope. That last one might be bullshit, though. You'll have to wait until you die to find out the REAL third prophecy of Fatima..
***

On this day in 1945, in the stark New Mexico desert of Alma Gordo, the first atom bomb is detonated by American scientists. Upon viewing the terrifying, awesome end-result of his team's frenzied research, Dr. Oppenheimer quotes aloud a line from the sacred Hindu holy text, the Bhaggavad Gita: "I am become death." Others present for the show just laugh and say: "She shore blowed up real good, din'she?!?"

The New York City Blackout took place on this day in 1977. The city was without power for 25 hours, and mass violence and looting took place. Check out Spike Lee's Summer of Sam for a fictionalized, but viscerally verisimilitudinous, portrayal of that event.


***
On this day in 1983, 3,000 Tamils are slaughtered in Sri Lanka… by a bunch of Buddhists. Jesus Fucking Naiholes! BUDDHISTS!!! Is there any religion in this world that doesn't cause its adherents to go batshit fucking insane?!
Posted by Jerky LeBoeuf at 3:00 AM