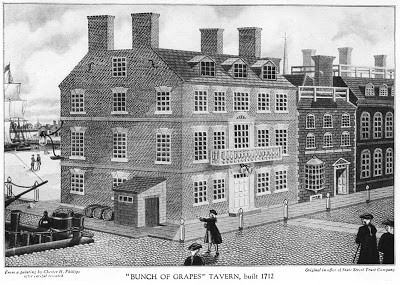 On this day in 762, Baghdad is founded by caliph Al-Mansur.

On this day in 1619, colonial Virginia's House of Burgesses is established. The first popularly elected legislature in the New World, the House of Burgesses meant Americans had a 157-year head start on democracy once they declared full independence from England in 1776, assuring a relatively smooth transition towards self-rule. Of course this "democracy" applied only to land-owning white dudes. But hey, you know... baby steps, people!

On this day in 1733, the first Masonic Grand Lodge in the future United States (aka Grapes Tavern) is constituted in Massachusetts.

On this day in 1839, a bloody revolt takes place on the slave ship La Amistad, thereby laying the groundwork for yet another "message" movie by Steven Spielberg.

On this day in 1945, Japanese submarine I-58 sinks the USS Indianapolis, killing 883 seamen during World War II.

On this day in 1962, the Trans-Canada Highway, the largest national highway in the world, is officially opened.

On this day in 1965, U.S. President Lyndon B. Johnson signs the Social Security Act of 1965 into law, establishing Medicare and Medicaid.

On this day in 1975, union boss Jimmy Hoffa disappears from the parking lot of the Machus Red Fox restaurant in Bloomfield Hills, Michigan, a suburb of Detroit, at about 2:30 p.m. He is never seen or heard from again, and will be declared legally dead on this date in 1982.

On this day in 1991, publicists for MTV announce that the groundbreaking cable music video channel would soon be splitting into three separate channels. Marketers call the move "expansion and diversification," while music lovers describe it as "metastasization."
Posted by Jerky LeBoeuf at 3:00 AM