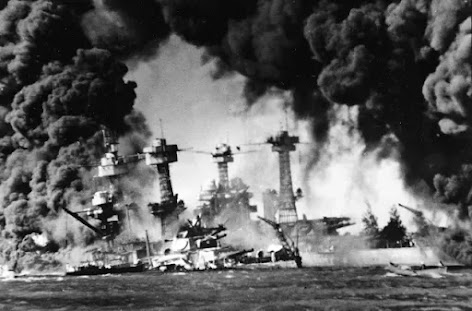 On this day in 1869, American outlaw Jesse James commits his first confirmed bank robbery in Gallatin, Missouri.
***
On this day in 1891, the United States' fifty-second Congress holds their first session. This Congress is significant, as they are the first Congress to have over $1 BILLION dollars to play with. And, you know, a billion dollars was a lot of money back then!
***
On this day in 1930, W1XAV in Boston, Massachusetts broadcasts video from the CBS radio orchestra program, The Fox Trappers. The broadcast also includes the first television commercial in the United States, an advertisement for IJ Fox Furriers, who sponsored the radio show.
***
On this day in 1941, at 7:53 in the morning, three-hundred-and-fifty-three Japanese bombers engage in a sneak attack on Pearl Harbor, Hawaii. In their wake, the bastards leave 2,403 dead soldiers and civilians, 188 destroyed planes, and a crippled Pacific battleship fleet. By attacking American forces, however, the Japanese bit off more than they could chew. As Churchill wrote in his memoirs: "Now at this very moment I knew the United States was in the war, up to the neck and in to the death... Hitler's fate was sealed.Mussolini's fate was sealed. As for the Japanese, they would be ground to powder." And so it was... for a time.
***
On this day in 1975, Indonesia invades East Timor.
***
On this day in 1982, in Texas, Charles Brooks Jr. becomes the first person to be executed by lethal injection in the United States.
***
On this day in 1993, Long Island Railroad passenger Colin Ferguson murders six people and injures 19 others on the LIRR in Nassau County, New York.
***
On this day in 1995, the Galileo spacecraft arrives at Jupiter, a little more than six years after it was launched by Space Shuttle Atlantis during Mission STS-34.
***
On this day in 2003, the Conservative Party of Canada is officially recognized after the merger of the Canadian Alliance and Progressive Conservative Party of Canada.
***
On this day in 2000, magnificently belligerent gonzo journalist Hunter S. Thompson writes the following:

"There was one exact moment, in fact, when I knew for sure that Al Gore would Never be President of the United States, no matter what the experts were saying - and that was when the whole Bush family suddenly appeared on TV and openly scoffed at the idea of Gore winning Florida... Losing was out of the question. Here was the whole bloody Family laughing and hooting and sneering at the dumbness of the whole world on National TV. The old man was the real tip-off. The leer on his face was almost frightening. It was like looking into the eyes of a tall hyena with a living sheep in its mouth."