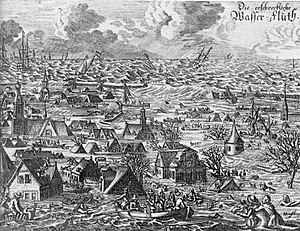 On this day in 1287, the St. Lucia flood takes place when the Zuiderzee sea wall in the Netherlands collapses, killing between 50,000 to 80,000 people.

On this day, in the year 1503, noted physician and visionary Nostradamus is born.

On this day in 1900, Kraut physicist Max Planck publishes his groundbreaking quantum theory of subatomic relations, forever changing the face of modern physics. Essentially, Planck demonstrated that radiant energy, depending on the circumstances, can exhibit characteristics previously thought to be the exclusive domain of physical matter. In other words, it can behave as both wave and particle. Subsequent experiments and theorems posited by other scientists like Albert Einstein, Niels Bohr and Erwin Schrodinger made possible the development of quantum mechanics, which allows multiple collision centers from all over town to work on the same car at the same time. Spooky, ain't it?

On this day in 1911, Roald Amundsen's team, comprising himself, Olav Bjaaland, Helmer Hanssen, Sverre Hassel, and Oscar Wisting, becomes the first to reach the South Pole.

On this day in 1962, NASA's Mariner 2 becomes the first spacecraft to fly by Venus.

On this day in 1990, a gravely ill and suffering Nancy Cruzan wins the right to have her feeding tube removed. Because doctors aren't allowed to assist in her suicide, it takes Nancy 12 days to die of dehydration and starvation.

On this day in 1994, construction begins on the Three Gorges Dam on the Yangtze River.

On this day in 1999, torrential rains cause flash floods in Vargas, Venezuela, resulting in tens of thousands of deaths, the destruction of thousands of homes, and the complete collapse of the state's infrastructure. Hell of a day for floods, eh?

On this day in 2004, the Millau Viaduct, the tallest bridge in the world, near Millau, France is officially opened.

On this day in 2008, Muntadhar al-Zaidi threw his shoes at then U.S. President George W. Bush during a press conference in Baghdad, Iraq.

On this day in 2012, 28 people, including the gunman, are killed in a mass shooting in Sandy Hook village, Newtown, Connecticut. launching a bunch of the dumbest conspiracy theories anybody ever heard of, unmatched in their stupidity until the Boston Marathon bombing, soon thereafter.
Posted by Jerky LeBoeuf at 3:00 AM