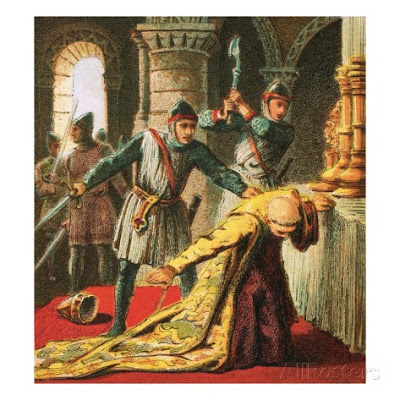 On this day in 1170, Thomas Becket, Archbishop of Canterbury, is assassinated inside Canterbury Cathedral by followers of King Henry II; he subsequently becomes a saint and martyr in the Anglican Church and the Catholic Church.

On this day in 1845, in accordance with International Boundary delimitation, United States annexes the Republic of Texas, following the manifest destiny doctrine. The Republic of Texas, which had been independent since the Texas Revolution of 1836, is thereupon admitted as the 28th U.S. state.

On this day in 1851, the first American YMCA opens in Boston, Massachusetts. I hear it's fun to stay there.

On this day in 1890, the U.S. Cavalry massacres 146 Sioux, including 44 women and 18 children, at Wounded Knee in South Dakota. It was the last, pathetic gasp in the long war against the Plains Indians, and it effectively put an end to the mystical Ghost Dance movement that had been sweeping through North America's decimated and defeated native population.

On this day in 1914, A Portrait of the Artist as a Young Man, the first novel by James Joyce, is serialized in The Egoist.

On this day in 1937, the Irish Free State is replaced by a new state called Ireland with the adoption of a new constitution.

On this day in 1949, KC2XAK of Bridgeport, Connecticut becomes the first Ultra high frequency (UHF) television station to operate a daily schedule.

On this day in 1959, physicist Richard Feynman gives a speech entitled "There's Plenty of Room at the Bottom", which is regarded as the birth of nanotechnology.

On this day in 1975, a bomb explodes at LaGuardia Airport in New York, New York, killing 11 people and injuring 74. Imagine the paroxysms of wall-to-wall, 24 hour coverage and overreaction if such a thing were to happen tomorrow.

On this day in 1997, Hong Kong begins to kill all the nation's 1.25 million chickens to stop the spread of a potentially deadly influenza strain. It's like Poultrygeddon or something.

On this day in 1998, leaders of the Khmer Rouge apologize for the 1970s genocide in Cambodia that claimed over 1 million lives. Oh, that's okay guys. No biggie. Just so long as you apologize.

On this day in 2003, the last known speaker of Akkala Sami dies, rendering the language extinct... or did it? Apparently, there is hope!

On this day in 2006, the UK finally settles its post-WWII debt to the USA.
Posted by Jerky LeBoeuf at 3:00 AM