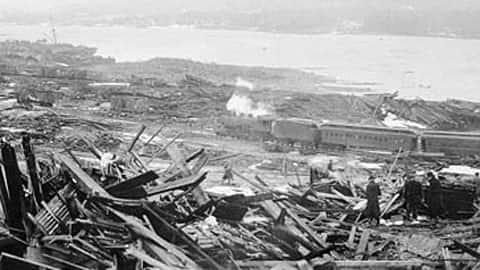 On this day in 1648, colonel Thomas Pride of the New Model Army purges the Long Parliament of MPs sympathetic to King Charles I of England, in order for the King's trial to go ahead; came to be known as "Pride's Purge".

On this day in 1768, the first edition of the Encyclopædia Britannica is published.

On this day in 1884, the Washington (Freemason) Monument in Washington D.C. is completed.

On this day in 1917, the most destructive man-made explosion of the pre-atomic age occurs when the French munitions ship Mont Blanc - bound for Europe, where World War I was raging - collides with the Norwegian vessel Imo in Canada's Halifax Harbor, setting off 35 tons of benzol, 300 tons of ammunition, 10 tons of gun cotton, 2,300 tons of picric acid, and 400,000 pounds of TNT. Over 2,000 people were evaporated. Another 9,000 were wounded. The city's north end was utterly destroyed. 1,600 homes were reduced to kindling. The barrel of one of Mont Blanc's cannons was found weeks later, three and a half miles from the explosion site. Windows 50 miles away were shattered in their frames, and people three hundred miles away heard the terrifying roar. An official Canadian inquiry into the disaster eventually ruled, and I quote: "it was just a plain bad luck stupid accident." Those gosh-darned Canucks... always so polite and forgiving!

On this day in 1928, the government of Colombia sends military forces to suppress a month-long strike by United Fruit Company workers, resulting in an unknown number of deaths.

On this day in 1953, Vladimir Nabokov completes his controversial novel Lolita.

On this day in 1969, a black man named Meredith Hunter is killed by the Hells Angels during a Rolling Stones concert at the Altamont Speedway in California after allegedly pulling out a pistol during the show and aiming it at Mick Jagger, who was performing "Sympathy for the Devil" on stage.

On this day in 1989, just after 5 PM, Mark Lepine strolled into the University of Montréal's engineering building with a .223 calibre semi-automatic rifle. A man after hate-radio superstar Rush Limbaugh's shriveled, shit-encrusted heart, Lepine shouted "You're all a bunch of feminists!" as he blasted bullets into the female students he lined up against the wall, after ordering all the men to leave the classroom. By the end of his spree, Lepine had murdered fourteen women and injured thirteen more.
Posted by Jerky LeBoeuf at 3:00 AM