On this day in 1522, Suleiman the Magnificent accepts the surrender of the surviving Knights of Rhodes during the Siege of Rhodes. They're allowed to evacuate. They eventually settle on Malta and become known as the Knights of Malta.

On this day in 1669, rabble-rouser Marcus Jacobson thought he was gonna get off light when he learned his punishment would be decided by the first ever trial-by-jury. Unfortunately for Marcus, his peers didn't much care for the cut of his jib. They sentenced him to be flogged, branded, and sold into slavery. He got PUNK'D!

On this day in 1803, the Louisiana Purchase is completed at a ceremony in New Orleans, Louisiana.

On this day in 1860, South Carolina becomes the first state to attempt to secede from the United States.

On this day in 1917, the Cheka, the first Soviet secret police force, is founded.

On this day in 1924, Adolf Hitler is released from Landsberg Prison. Chaos ensues.

On this day in 1946, the popular Christmas film It's a Wonderful Life is first released in New York, New York.

On this day in 1968, the Zodiac Killer kills Betty Lou Jenson and David Faraday in Vallejo, California.

On this day in 1983, the South American nation of El Salvador adopts their second constitution in as many decades. Yer old pal Jerky supposes the El Salvadoreans aren't big on that whole "amendment" thing. Maybe they could write their next constitution on an Etch-a-Sketch. Whenever they're sick of the old one, just shake and start over!

On this day in 2004, Preznit Dubya's plan to keep the Department of Homeland Security under the leadership of men with oddly shaped heads hits a snag. Former New York City police commissioner Bernard Kerik - whose cranium evokes memories of WWI-era mortar shells - seemed like a shoe-in to replace Big Tom Ridge, whose own notorious noggin is approximately the size, shape and density of a cinder block. Unfortunately, it soon became obvious that Kerik's nomination was a five hundred pound albatross. Officially, Kerik withdrew his nomination because of unpaid taxes on "an illegal babysitter" who doesn't seem to exist. More likely it was because of his failure to disclose expensive gifts from political pals, his multiple, overlapping extramarital affairs, his highly inappropriate partisan pandering during the presidential campaign, a warrant being issued for his arrest due to unpaid rent, his ties to organized crime, and his flirtation with bigamy. And so, the search was on. Before settling on the cadaverous and incompetent Michael Chertoff, these were some of the candidates being considered: 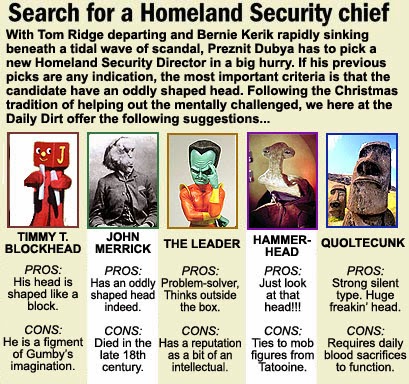