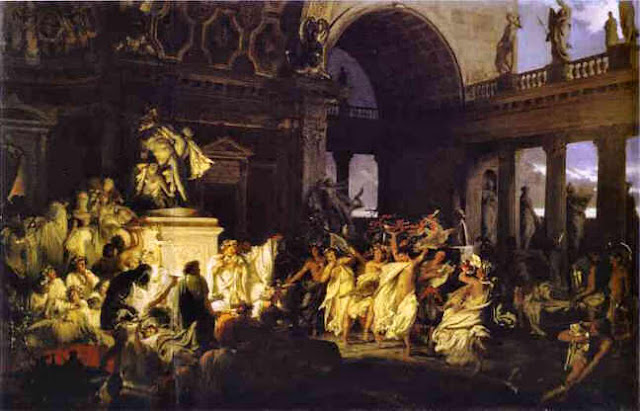 On this day in 1501, a banquet held by Cesare Borgia in the Papal Palace where fifty prostitutes or courtesans are in attendance for the entertainment of the guests. This legendary party is often referred to as the Ballet of Chestnuts, for some reason.

On this day in 1806, believing he is facing a much larger force, Prussian Lieutenant General Friedrich von Romberg, commanding 5,300 men, surrendered the city of Stettin to 800 French soldiers commanded by General Lassalle.

On this day in 1831, in Southampton County, Virginia, escaped slave Nat Turner is captured and arrested for leading the bloodiest slave rebellion in United States history.

On this day in 1905, Tzar Nicholas II's "October Manifesto" grants civil liberties to his Russian subjects. Having been given an inch, the Bolsheviks soon decide to take a foot.

On this day in 1938, soon-to-be-cinematic auteur Orson Welles broadcasts his radio play of H.G. Wells's The War of the Worlds, causing anxiety in some of the audience in the United States.

On this day in 1941, Franklin Delano Roosevelt approves U.S. $1 billion in Lend-Lease aid to the Allied nations before the USA officially joins in the World War II festivities.

On this day in 1953, U.S. President Dwight D. Eisenhower formally approves the top secret document National Security Council Paper No. 162/2, which states that the United States' arsenal of nuclear weapons must be maintained and expanded to counter the communist threat. An uncontrollable military-intelligence-industrial-media-complex ensues.

On this day in 1960, Michael Woodruff performs the first successful kidney transplant in the United Kingdom at the Edinburgh Royal Infirmary.

On this day in 1961, the Soviet Union detonates the hydrogen bomb Tsar Bomba over Novaya Zemlya; at 50 megatons of yield, it is still the largest explosive device ever detonated, nuclear or otherwise.

On this day in 1974, the Rumble in the Jungle boxing match between Muhammad Ali and George Foreman takes place in Kinshasa, Zaire. Guess who won?
Posted by Jerky LeBoeuf at 4:00 AM