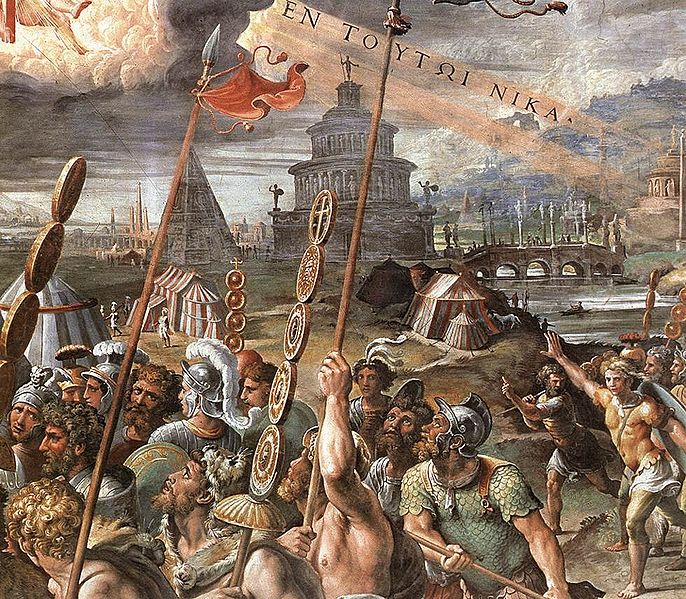 On this day in 312, during the Battle of the Milvian Bridge, Constantine the Great is said to have received his famous Vision of the Cross, after which he decides to fight "under the protection of the Christian God" by slapping crosses on his soldiers' shields and armor. His troops win the battle and Christianity starts its long march towards becoming the most important world religion for the next thousand-plus years.

On this day in 1553, after being condemned as a heretic, Spanish theologian, physician, cartographer and Renaissance humanist Michael Servetus is burned at the stake just outside Geneva.

On this day in 1682, the city of Philadelphia, Pennsylvania - the City of Brotherly Love - is founded.

On this day in 1838, Missouri governor Lilburn Boggs issues the Extermination Order, which orders all Mormons to leave the state or be exterminated. Seriously.

On this day in 1904, the first underground New York City Subway line opens; the system becomes the biggest in United States, and one of the biggest in world.

On this day in 1936, Mrs Wallis Simpson files for divorce which would eventually allow her to marry King Edward VIII of the United Kingdom, thus forcing his abdication from the throne.

On this day in 1962, Major Rudolf Anderson of the United States Air Force becomes the only direct human casualty of the Cuban Missile Crisis when his U-2 reconnaissance airplane is shot down in Cuba by a Soviet-supplied SA-2 Guideline surface-to-air missile.

On this day in 1962, A plane carrying Enrico Mattei, post-war Italian administrator, crashes under mysterious circumstances. Don't they all?

On this day in 1964, washed up actor Ronald Reagan delivers a speech on behalf of Republican candidate for president, Barry Goldwater.

On this day in 1986, the British government suddenly deregulates financial markets, leading to a total restructuring of the way in which they operate in the country, in an event now referred to as the Big Bang.

On this day in 1988, President Ronald Reagan decides to tear down the new U.S. Embassy in Moscow because of Soviet listening devices in the building structure.

On this day in 1999, gunmen open fire in the Armenian Parliament, killing Prime Minister Vazgen Sargsyan, Parliament Chairman Karen Demirchyan, and 6 other members.

On this day in 2005, riots begin in Paris after the deaths of two Muslim teenagers who were running from police. It was some batshit crazy bullshit that went down, and that's for damn sure. Check out this timeline for more information.
Posted by Jerky LeBoeuf at 4:00 AM