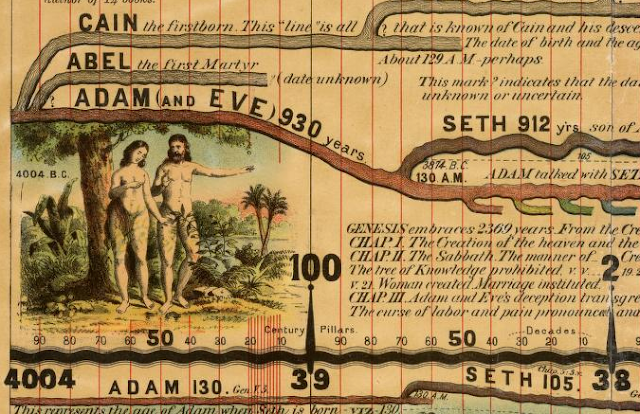 On this day in the year 4004 BC, at exactly 8 PM, THE LORD THY GOD begins creating the universe. At least, that's the story according to seventeenth century Anglican archbishop James Usher, who no doubt spent uncountable minutes pouring over dozens of Bibles to reach his theologically-binding conclusions.

On this day in 1797, one thousand meters above Paris, André-Jacques Garnerin makes the first recorded parachute jump. Quite the gutsy move for a Frenchman!

On this day in 1844, a group of Millerites – followers of Christian evangelical figure William Miller – anticipate the end of the world in conjunction with the Second Advent of Christ. When the world fails to end the following day, it becomes known as the Great Disappointment. Heheh… Christians.

On this day in 1924, the public speaking organization Toastmasters International is founded.

On this day in 1926, some idiot named J. Gordon Whitehead sucker punches magician Harry Houdini in the stomach in Montreal, precipitating his death.

On this day in 1962, US President John F. Kennedy announces that American reconnaissance planes have discovered Soviet nuclear weapons in Cuba, and that he has ordered a naval "quarantine" of the Communist nation.

On this day in 1964, French philosopher/novelist Jean-Paul Sartre is awarded the Nobel Prize for Literature, but turns down the honor.

On this day in 1964, a Multi-Party Parliamentary Committee selects the design which eventually becomes the new official Flag of Canada.

On this day in 1975, Air Force sargeant Leonard Matlovich, a decorated Vietnam veteran, is given a "general" discharge after coming out of the closet as a gay man. Not the kind of man to take such a thing lying down (he preferred "taking it" whilst on all fours), Matlovich launched a legal challenge against the Air Force's no homos policy, sparking a controversy that landed him on the cover of Time Magazine. Matlovich's lawsuit failed to get the ban tossed out, but after four years in court, he succeeded in getting his discharge upgraded to "honorable." Nine years after that, he died of AIDS. His epitaph in the Congressional Cemetery reads: "A gay Vietnam Veteran. When I was in the military they gave me a medal for killing two men and a discharge for loving one."

On this day in 1976, Red Dye No. 4 is banned by the US Food and Drug Administration after it is discovered that it causes tumors in the bladders of dogs. The dye is still used in Canada.

On this day in 1979, the Walt Disney World entertainment complex welcomes Sue Anne Dobbs, their one-hundred-millionth visitor! Later that night, Mickey Mouse-headed thugs kidnap Dobbs from her hotel room and drag her down into the Magic Kingdom's vast network of underground tunnels. There, they offer her up as a blood sacrifice to their cryogenically frozen idol/God, Walt Disney, who surveys the wanton butchery from behind the frosted Plexiglas window of his icy sarcophagus.

On this day in 1986, WNBC-AM NYC traffic reporter Jane Dornnacker transmitting a traffic report over the airwaves when her helicopter crashes to the ground for some reason, killing her and her pilot as a stunned radio audience listens live.