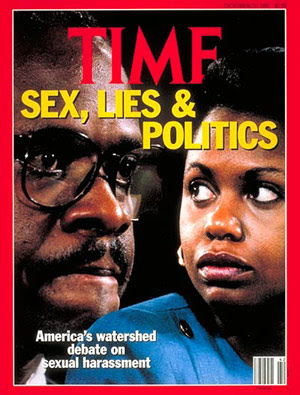 Flash forward a few years, and these same conservatives have no problem buying into the similarly unsubstantiated - and similarly impossible to disprove - stories told (and sold) by Paula "Penthouse" Jones, Kathleen "4 different stories" Willey and Juanita "what year was I raped in?" Broderick. They hounded, pilloried and even went so far as to impeach president Clinton for lying about a consensual sexual dalliance initiated by another.

Flash forward another four years, and when more than twenty women come forward to accuse gubernatorial candidate Arnold Schwarzenegger of groping, harassing and intimidating them, the nation's conservatives undergo yet another ethical flip-flop.

So for those of you keeping score at home, here's the deal: Anita Hill was (all evidence to the contrary) a politically motivated liar. The antebellum damsels who claimed Clinton wagged his pecker at'em? They were telling the TRUTH, obviously, and how dare you question their constantly-changing stories?! And what about Schwarzenegger's dozens of accusers? Conservatives were so outraged by these women's allegations that they canceled their subscriptions to the Los Angeles Times for daring to report on them!

Hypocrisy, thy name is conservatism.

On this day in 1890, in Washington, DC, the Daughters of the American Revolution is founded.

On this day in 1899, the Second Boer War begins: In South Africa, a war between the United Kingdom and the Boers of the Transvaal and Orange Free State erupts.

On this day in 1910, Former President Theodore Roosevelt becomes the first U.S. president to fly in an airplane. He flew for four minutes with Arch Hoxsey in a plane built by the Wright Brothers at Kinloch Field (Lambert-St. Louis International Airport), St. Louis, Missouri.

On this day in 1950, the FCC issues CBS the first license to broadcast color television programming. In those early days, however, color TV was quite primitive. Technical limitations were such that only a single color could be broadcast at any one time, creating a rather disorienting viewing experience. And making matters worse was the fact that color TV sets were prohibitively expensive, weighed as much as an 8-cylinder engine, and emitted enough radiation to hard-boil an egg. No wonder it wasn't until 1968 that color sets first outsold black and white.

On this day in 1972, a race riot occurs on the United States Navy aircraft carrier Kitty Hawk off the coast of Vietnam during Operation Linebacker.

On this day in 1975, Saturday Night Live debuts on NBC with George Carlin as the host and Andy Kaufman, Janis Ian and Billy Preston as guests.

On this day in 2001, the Polaroid Corporation files for federal bankruptcy protection.
Posted by Jerky LeBoeuf at 4:00 AM