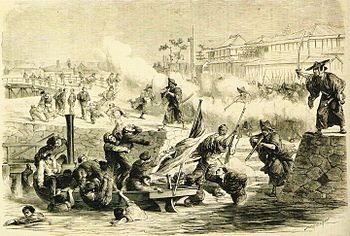 On this day in 1010, Ferdowsi completes his epic poem in honor of his homeland, Iran: Shāhnāmeh.

On this day in 1618, Johannes Kepler discovers the third law of planetary motion.

On this day in 1655, John Casor becomes the first legally-recognized slave in England's North American colonies where a crime was not committed.

On this day in 1722, the Safavid Empire of Iran is defeated by an army from Afghanistan at The Battle of Gulnabad, pushing Iran into anarchy.

On this day in 1775, an anonymous writer, thought by some to be Thomas Paine, publishes "African Slavery in America", the first article in the American colonies calling for the emancipation of slaves and the abolition of slavery.

On this day in 1782, 96 Native Americans in Gnadenhutten, Ohio, who had converted to Christianity are killed by Pennsylvania militiamen in retaliation for raids carried out by other Indians.

On this day in 1868, the Sakai incident occurs, when Japanese samurai kill 11 French sailors in the port of Sakai near Osaka.

On this day in 1910, French aviatrix Raymonde de Laroche becomes the first woman to receive a pilot's license.

On this day in 1930, the teacher Mohandas "the Mahatma" Gandhi calls for widespread civil disobedience in British-occupied India. The core of Gandhi's movement, which would eventually succeed in expelling the occupiers, was "Satyagraha", a three-part concept including "Sat" (truth) "Ahimsa" (pacifism) and "Tapasya" (the willingness to sacrifice one's self).

On this day in 1934, astronomer Edwin Hubble reveals a photograph showing that there are as many visible galaxies as there are stars in the Milky Way galaxy. Although Hubble's first words upon seeing the image weren't recorded for posterity, yer old pal Jerky imagines they were probably on the order of: "Holy SHIT-balls! Look at all those fuckin' GALAXIES!!! I'll make millions from the posters, alone!"

On this day in 1963, the Ba'ath Party comes to power in Syria in a coup d'état by a clique of quasi-leftist Syrian Army officers calling themselves the National Council of the Revolutionary Command.

On this day in 1978, the first radio episode of The Hitchhiker's Guide to the Galaxy, by Douglas Adams, is transmitted on BBC Radio 4.

On this day in 1979, Philips demonstrates the Compact Disc publicly for the first time.

On this day in 1983, U.S. President Ronald Reagan calls the Soviet Union an "evil empire".

Also on this day, in 1993, six gallons of milk are delivered to David Koresh's Branch Davidian compound in Elk/Waco/Carmel, on the ninth day of the ATF/FBI siege there. Also, Koresh – whose wounds are healing nicely – sends out a videotape containing footage of the children still trapped in the compound with him… and informs negotiators that all these children are, biologically, his own.

On this day in 1999, the Crayola company announced that it would be caving in to the requests of various Native American organizations by doing away with the popular Indian Red color crayon. Previously, the last time Crayola changed the name of one of its crayons was in 1962, when civil rights advocates asked that the crayon labeled "flesh" be changed to "peach" in recognition of the fact that not everybody is as pigmentationally challenged as the average member of the Caucasian race. At the time, we here at the Daily Dirt applauded Crayola's politically correct appeasement of a downtrodden minority. Unfortunately, their follow-through hasn't been as good as it should be. For instance, we're still waiting for them to do away with all those other offensive colors, like Zipperhead Yellow, Jungle-bunny Black and Sunset Spic. But hey... progress takes time, I guess.

On this day in 2004, a new constitution is signed by Iraq's Governing Council. And they lived happily ever after.
Posted by Jerky LeBoeuf at 3:00 AM