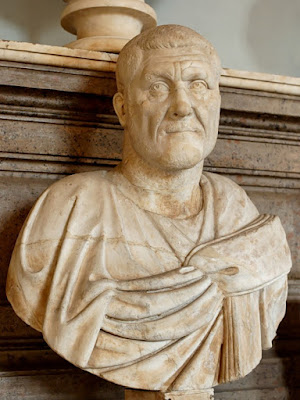 On this day in 235, Maximinus Thrax is proclaimed emperor. He is the first foreigner to hold the Roman throne, was roughly the size (and strength) of Andre the Giant, and never actually set foot in Rome. Strange dude.

On this day in 1616, Sir Walter Raleigh is freed from the Tower of London after 13 years of imprisonment.

On this day in 1852, Harriet Beecher Stowe's Uncle Tom's Cabin is published.

On this day in 1854, the Republican Party of the United States is organized in Ripon, Wisconsin. Chaos ensues.

It's a real-life case of Romeo and Juliet, redneck-style, when a member of the Hatfield clan ignores his kinfolks' pleas and marries a McCoy woman on this day in 1891, thereby ending the second longest and bloodiest family feud in the history of the United States. The bloodiest family fued in the history of the United States was, of course, the Bushes versus the Husseins.

On this day in 1916, Albert Einstein publishes his general theory of relativity.

On this day in 1985, Canadian paraplegic athlete and humanitarian Rick Hansen begins his circumnavigation of the globe in a wheelchair in the name of spinal cord injury medical research.

On this day in 1991, guitar god Eric Clapton has to fire his babysitter.

On this day in 1995, during rush hour in Tokyo, Japan, ten members of the Aum Shinrikyo religious cult release sarin nerve gas into the subway system. Twelve people die in the attack, and over five thousand others are treated for various ill effects, although many "survivors" suffered permanent damage to their eyes, lungs, and digestive systems. It all started in the 1980s, when Aum's leader - an obese, blind furball by the name of Shoko Asahara - combined Buddhism and yoga with apocalyptic Christian End Times mythology, resulting in a potent religious brew that appealed strongly to Japan's disaffected young adults, who believed the Land of the Rising Sun had lost its soul in pursuit of the Almighty Yen. Declaring himself to be the reincarnation of both the Christ and the Buddha, Shoko saw his movement as a potential New Order. Then he started stockpiling weapons and murdering political opponents, disposing of their bodies in a giant microwave oven built for this express purpose. On February 27th of this year, just one year and a few weeks ago, Shoko was finally found guilty and sentenced to death for his crimes. The case has been appealed to Japan's Supreme Court. For some reason, Japan still allows Aum to exist. The cult maintains impressive membership numbers, though the've changed their name to Aleph in an attempt to start fresh.

On this day in 2000, Jamil Abdullah Al-Amin, a former Black Panther once known as H. Rap Brown, is captured after murdering Georgia sheriff's deputy Ricky Kinchen and critically wounding Deputy Aldranon English, both of whom are black.
Posted by Jerky LeBoeuf at 3:30 AM