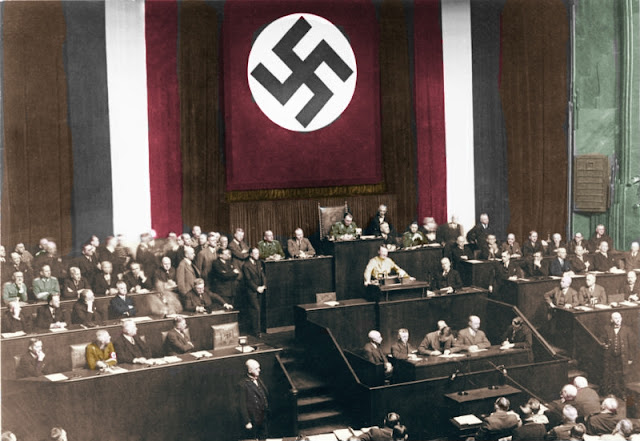 On this day in 1775, American revolutionary Patrick Henry delivers his speech, during which he declares: "Give me Liberty, or give me Death!" In the end, he got both.

On this day in 1919, in Milan, Italy, Benito Mussolini founds his Fascist political movement.

On this day in 1933, the Reichstag passes the Enabling Act, making Adolf Hitler dictator of Germany.

On this day in 1972, in Vegas, the great Evel Knievel – the Elvis of Idiots – successfully jumps over an incredible thirty-five automobiles on his motorcycle, then breaks an incredible ninety-three bones when his rear tire clips the thirty-sixth.

On this day in 1973, Japanese "artist" Yoko Ono is granted permanent residence in United States of America. It would take nearly 20 years for the INS to fuck up that badly again.

On this day in 1980, Archbishop Óscar Romero of El Salvador gives his famous speech appealing to men of the El Salvadoran armed forces to stop killing the Salvadorans. Two years later, on this day in 1982, Guatemala's government, headed by Fernando Romeo Lucas García is overthrown in a military coup by right-wing General Efraín Ríos Montt. It was NOT a good time to be a Central American, thanks in large part to the feature player in our next calendrical entry...

On this day in 1983, President Ronald Reagan makes his initial proposal to develop technology to intercept enemy missiles, aka Strategic Defense Initiative, aka SDI, aka Star Wars.

On this day, in 1993, at 10:05 a.m., Livingstone Fagan leaves David Koresh's Branch Davidian compound in Mount Carmel/Elk/Waco, Texas. He is the last Davidian to willingly leave the compound during the standoff. Later that same day, the FBI begins to play recordings of their previous negotiations with Koresh over loudspeakers, to shame him into keeping his word about coming out. Koresh is not phased by this tactic.

Howard Stern announces he will run for the New York Governorship on this day in 1994. He quits, however, upon discovering details of his financial situation would have to be made public.

On this day in 1994, Aeroflot Flight 593 crashes in Siberia when the pilot's fifteen-year old son accidentally disengages the autopilot, killing all 75 people on board.

On this day in 2001, the Russian Mir space station is disposed of, breaking up in the atmosphere before falling into the southern Pacific Ocean near Fiji.

Some Very Important People who kicked the bucket on this day… Dr Barney Clark, the very first artificial heart recipient, dies in 1983 after surviving 112 days! Also, on this day in 1985, the Singing Nun and her lesbian lover die after they wash down gorilla-doses of barbiturates with vodka! And finally, on this day in 1986, Dominic Bellissimo – creator of the buffalo-style chicken wing – dies at 68! Happy Deathday you crazy kids!
Posted by Jerky LeBoeuf at 3:30 AM