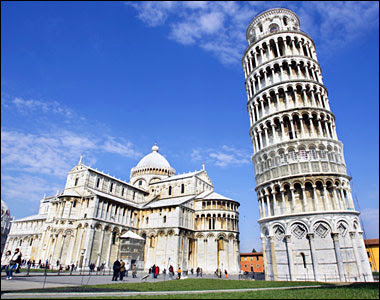 On this day in 1173, construction of the campanile of the cathedral of Pisa – now known as the Leaning Tower of Pisa – begins. It will take two centuries to complete, and yet STILL they fuck the damn thing up!

On this day in 1483, the Sistine Chapel opens for public viewing in Rome with the celebration of a Mass.

On this day in 1854, American philosopher-writer Henry David Thoreau publishes his masterpiece, Walden.

On this day in 1930, the sexiest little cartoon character of all time, Betty Boop, makes her debut in Dizzy Dishes.

On this day in 1936, American Olympian Jesse Owens throws a wrench into Adolf Hitler's plans to use the Berlin Olympics as a showcase for the superiority of Aryan Nazi Supermen when he wins his fourth gold medal of the games. The first person to run over and congratulate Jesse, in full view of a flustered Fuhrer, was the giant, smiling Nazi Luz Long, about whom Jesse Owens would later write: "You could melt down all the medals and cups I have, and they wouldn't be a plating on the 24-carat friendship I felt for Luz Long."

On this day in 1942, Indian leader Mahatma Gandhi is arrested in Bombay by British forces, launching the Quit India Movement.

On this day in 1944, the United States Forest Service and the Wartime Advertising Council release posters featuring Smokey Bear for the first time.

On this day in 1945, the second part of the atom bomb one-two punch landed by the USA against Japan takes place when the city of Nagasaki is devastated by an atomic bomb called Fat Man.  39,000 people are killed instantly in this incredible international horror.

On this day in 1965, the island/city of Singapore becomes the first (and so far only) nation in history to gain independence (from Malaysia) against its will.

On this day in 1969, members of Charles Manson's "family" butcher Sharon Tate and four of her friends in Beverly Hills. The next day,Manson - upset with his underlings for their lack of murderous panache - orders his crew out on another raid "to show you how it's done." Charlie had forgotten one thing, however: his all-consuming cowardice. The trash-talking, acid-gobbling midget freak had to leave the room before his brain-fried followers slaughtered the victims that Charlie, himself, had hand-picked... the LaBianca family. If you're at all interested in the background and different theories about what really went down back then in those crazy, acid-hazy days, then you should most definitely read Adam Gorightly's incredible book, The Shadow Over Santa Suzana: Black Magic, Mind Control and the Manson Family Mythos.

On this day in 1974, as a direct result of the Watergate scandal, Richard Nixon becomes the first President of the United States to resign from office. His Vice President, Gerald Ford, becomes president.
Posted by Jerky LeBoeuf at 4:00 AM