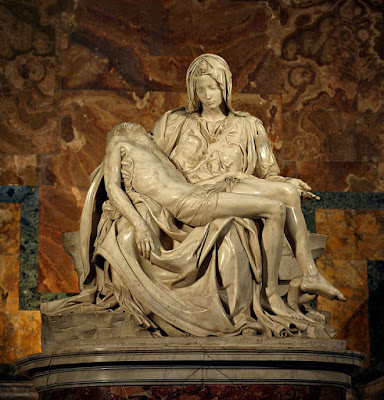 On this day in 1498, the legendary artist Michelangelo is commissioned to carve the world-famous Pietà.

On this day in 1789, the Declaration of the Rights of Man and of the Citizen is approved by the National Constituent Assembly of France.

On this day in 1883... KA-FUCKIN-BOOM!!! The island of Krakatoa (near Java) blows up real good, killing 36,000 people in the process. Most died after being swept away by the humongous tidal waves that encircled the world's oceans after the ocean collapsed in on the smoking hole the explosion left behind. Ash and debris that had been blasted into the atmosphere by the explosion darkened the sky and cooled the planet for a year afterwards.

On this day in 1920, the 19th Amendment to the Constitution is passed, granting women the right to vote. Since then, we've been involved in over a dozen major military conflicts, experienced two dozen major earthquakes, three massive droughts and two massive, nation-wide silk-worm infestations. Coincidence? Not bloody likely.

Memo to automobile manufacturers: NEVER roll out a new line of automobiles on this day, ever again. It was on this day in 1957 that the Ford Motor Company introduced the Edsel to the car-buying public. Named after Henry Ford’s son, Edsel Bryant, the Edsel was the first car built based on market research, which showed that consumers wanted more horsepower, tailfins, three-tone paint jobs, and wrap-around windshields. Apparently, Ford's executives didn't know then what yer old pal Jerky knows, now... mainly, that the vast majority of people are TOO FUCKING STUPID to know what they want. Also, on this day in 1985, that Yugoslavian-built punchline-on-wheels known as the Yugo makes its North American debut. Remember Saturday Night Live's satirical commercial for the Adobe? The "little car that's made out of clay"? The Yugo wasn't much better.

On this day in 1970, the then new feminist movement, led by Betty Friedan, leads a nation-wide Women's Strike for Equality. It doesn't work.

On this day in 1977, the Charter of the French Language is adopted by the National Assembly of Quebec. English Canadians from sea to sea to sea shit their collective drawers in goofball outrage.
Posted by Jerky LeBoeuf at 4:00 AM