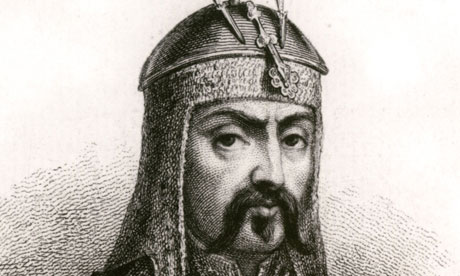 On this day in 1227, the merciless Genghis Khan - who, beginning as a juvenile delinquent gang-leader in his early teens, led one of the most expansive and successful world conquests in history, laying the foundations for a family dynasty that lasted centuries - dies after a long illness. Near the Xi Xia region of China at the time of his death, Khan's soldiers march their beloved leader's corpse back to Mongolia, killing every living thing that crosses their path along the way. How fuckin' cool is that?!

On this day in 1634, a priest named Urbain Grandier is accused and convicted of sorcery, only to be burned alive in Loudun, France. Aldous Huxley wrote about this in his historical novel The Devils of Loudun, and Ken Russell made a controversial film about it, called The Devils, in the early 1970s.

On this day in 1920, the Nineteenth Amendment to the United States Constitution is ratified, guaranteeing women's suffrage (a.k.a. the vote).

On this day in 1950, Julien Lahaut, the chairman of the Communist Party of Belgium is assassinated by far-right elements.

On this day in 1958, novelist Vladimir Nabokov's controversial novel Lolita is published in the United States.

On this day in 1977, South African freedom fighter Steve Biko is arrested at a police roadblock under the Terrorism Act No 83 of 1967 in King William's Town, South Africa. He would later die of the injuries sustained during this arrest bringing attention to South Africa's apartheid policies.