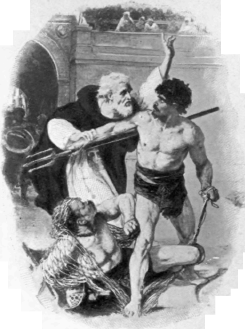 New Year's Day is celebrated for the first time in history as the Julian calendar takes effect on this day in 45 BC. Yer old pal Jerky is still trying to figure out how they knew to start counting backwards until Jesus was born.

***
On this day in 404, an infuriated Roman mob tears Telemachus, a Christian monk, to pieces for trying to stop a gladiators' fight in the public arena held in Rome.

***
On this day in 1801, the dwarf planet Ceres is discovered by Giuseppe Piazzi.

***
On this day in 1804, after the first and to date only successful slave revolution, French rule ends in Haiti, which becomes the first black republic and second independent country in North America after the United States.

***
On this day in 1808, the importation of slaves into the United States is made illegal, thus forcing slave-holding families to start "growing their own" by breeding new slaves from existing stock. A peculiar institution, indeed.

***
On this day in 1934, Nazi Germany passes the "Law for the Prevention of Genetically Diseased Offspring", thus paving the way for the establishment of death camps.

***
On this day in 1945, in one of the worst American war crimes of World War II, enraged U.S. troops massacre 30 Nazi SS prisoners at Chenogne in retaliation for the Malmedy massacre.

***
On this day in 1959, Fulgencio Batista, dictator of Cuba, is overthrown by Fidel Castro's forces during the Cuban Revolution.

***
On this day in 1971, cigarette advertisements are banned on American television.

***
On this day in 1989, the Montreal Protocol on Substances That Deplete the Ozone Layer comes into force. The effect these protocols have on ozone depletion is, you might be pleasantly surprised to find out, immensely beneficial.

***
On this day in 1995, the Draupner Wave in the North Sea in Norway is detected, confirming the existence of freak waves.
***
On this day in the year 2000, an awful lot of people feel pretty fuckin' silly while contemplating all those bags or rice, cans of sliced peaches and ten gallon bottles of water they bought to prepare for the global meltdown that was supposed to befall us at the stroke of midnight on Y2K.
Posted by Jeeribaldi at 3:00 AM