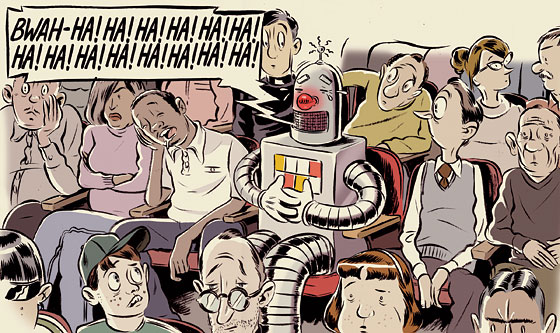 The stupidification of the American TV-watcher began on this day in 1950, when The Hank McClune Show became the first TV show ever to use an artificial "laugh-track" to inform viewers of the presence of comedy.

On this day in 1956, Elvis "the pelvis" Presley made his first nationwide TV appearance on the Ed Sullivan Show, where he kicked up a helluva fuss, just a-screechin' and a-swingin' his hips around like he was a big ol' crazy gurl or sumthin. I swear it put me off muh FOOD! Didja see it? A real travesty. Thank JehovaH that rock-and-roll racket was just a passing fad.

1971, John Lennon's album Imagine goes on sale. Meanwhile, one thousand National Guardsmen, State Troopers and local police storm New York State's Attica Prison after a breakdown in negotiations between officials and the prisoners who took 32 guards as hostages. Governor Rockefeller orders an all-out attack, resulting in the deaths of 32 inmates and 9 of their hostages.

On this day in 1999, a Seattle transsexual climbed atop an electrical tower beside a freeway bridge during rush hour and gave commuters a show they won't ever forget. Wearing nothing but a pair of short pants, Ara Tripp danced, wagged her tits around, and spit vodka-fueled flames in the air. In an effort to keep this freak from frying, cops cut off power to the tower, blacking out 5000 homes for almost an hour. After her arrest for indecent exposure and trespassing, Tripp admitted to cops that he/she/it pulled the stunt because he/she/it wanted to get on the talk show circuit. By that measure, he/she/it failed miserably... but still, you have to admire his/her/its showmanship!