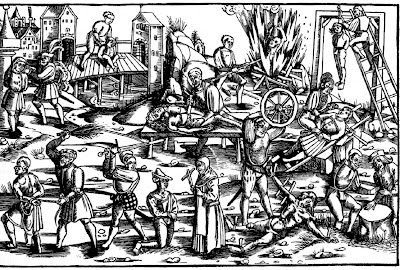 On this day in 1498, the most successful Inquisitor General in the long and sordid history of the Catholic Church - Tomas de Torquemada - passes away quietly in his sleep. His 11,500+ victims - Jews and others who were systematically burned, bludgeoned, drowned, flayed, hanged, vivisected and otherwise torn asunder - met far more unquiet fates.

On this day in 1620, the Mayflower starts her voyage to North America

On this day in 1919, the American Legion is incorporated.

On this day in 1920, the Wall Street bombing takes place when a bomb in a horse wagon explodes in front of the J. P. Morgan building in New York City – 38 are killed and 400 injured.

On this day in 1941, during World War II, concerned that Reza Pahlavi the Shah of Persia is about to ally his petroleum-rich empire with Nazi Germany, the United Kingdom and the Soviet Union invade Iran in late August and force the Shah to abdicate in favor of his son, Mohammad Reza Pahlavi. So the Anglo world has been messing with Iran since even before the Mossadegh coup!

On this day in 1959, the first successful photocopier, the Xerox 914, is introduced in a demonstration on live television from New York City. This is a vitally important moment in the history of samizdat and underground publishing.

On this day in 1982, the Sabra and Shatila massacre takes place in Lebanon.

On this day in the year 1983, Austrian immigrant Arnold Schwarzenthingy becomes a citizen of the United States of America. Now all we have to do is figure out a way to send him back.

On this day in 2007, mercenaries working for Blackwater Worldwide allegedly shoot and kill 17 Iraqis in Nisour Square, Baghdad; all criminal charges against them are later dismissed, sparking outrage in the Arab world.
Posted by Jerky LeBoeuf at 4:00 AM