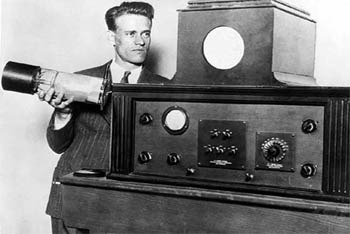 On this day in 1927, in San Francisco, inventor Philo Farnsworth first demonstrates his most wide-spread and world-altering invention, the Television Set! Few people know that Farnsworth's Imago-Visor (as the TV was originally supposed to be called) was an accidental by-product of the legendary inventor's attempt to build a device that could sterilize "the lower races."

On this day in the year 1981, Judge Joseph Wapner berates his first set of knuckle-dragging mouth-breathers on the premiere episode of that ubiquitous television touch-stone: The People's Court. Meanwhile, as Wapner rages, Doug Lewellyn waits for his moment in the spotlight while a stylist secures his boufant hair-helmet with a sturdy chin-strap.

On this day in 1999, Allan Funt, the creator of Candid Camera, passes away at the ripe old age of 84. Candid Camera, which caught regular people in embarrassing, staged situations via hidden camera, was the first ever reality-based, non-news television show. Ultimately, however, yer old pal Jerky believes Funt will be fondly remembered as the only celebrity who's name rhymed with cunt.
Posted by Jerky LeBoeuf at 3:00 AM