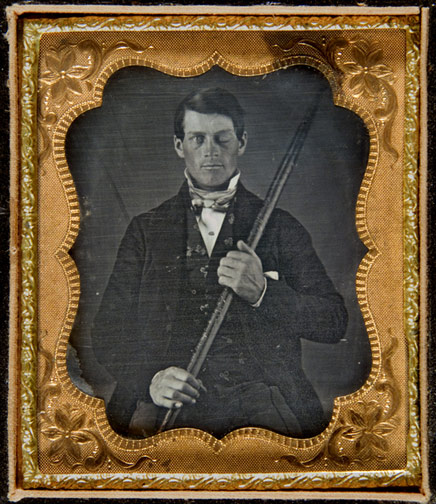 On this day in 1501, Michelangelo begins work on his statue of David.

On this day in 1743, Great Britain, Austria and the Kingdom of Sardinia sign the Treaty of Worms. Ewww…

On this day in 1759, England's General James Wolfe advances on French General Louis-Joseph de Montcalm-Gozon's defensive position on Quebec's Plains of Abraham in a battle that would claim both officers' lives. Gravely wounded during the battle, Montcalm asks his battlefield doctor how long he can expect to live. "Scant hours, my lord," replied the physician. "Good," Montcalm replies, "at least I won't live to see the English take Quebec."

On this day in 1848, Vermont railroad worker Phineas Gage survives a 3-foot-plus iron rod being driven through his head; the reported effects on his behavior and personality stimulate thinking about the nature of the brain and its functions.

On this day in 1899, Henry Bliss is the first person in the United States to be killed in an automobile accident.

On this day in 1942, German forces attack the Russian city of Stalingrad. The operation turns out to be a little bit tougher than the Nazis had anticipated. By the time the siege is over seventeen months later, more than 147,000 Germans and over half a million Russians will have died.

On this day in 1956, The IBM 305 RAMAC is introduced, the first commercial computer to use disk storage.

On this day in 1971, State police and National Guardsmen storm New York's Attica Prison to end a prison revolt. It doesn't go so well.

On this day in 1971, Chairman Mao Zedong's second in command and successor Marshal Lin Biao flees China via plane after the failure of alleged coup against Mao. The plane crashes in Mongolia, killing all aboard.

On this day in 1977, for the first time ever, a major television network advises viewer discretion before airing a program. The program in question was the broadly satirical and somewhat controversial sitcom Soap, starring Billy Crystal as a homosexual. Hence, the warning.

On this day in 1987, a radioactive object is stolen from an abandoned hospital in Goiânia, Brazil, contaminating many people in the following weeks and causing some to die from radiation poisoning.