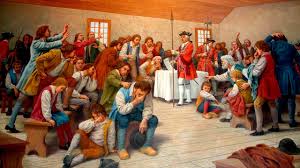 On this day in 1611, the mutinous crew of Henry Hudson's fourth voyage sets Henry, his son and seven loyal crewmembers adrift in an open boat in what is now Hudson Bay, one of the harshest, most unforgiving bodies of water on the planet. They are never heard from again, obviously.

On this day in 1713, French-speaking residents of Acadia are given one year to declare allegiance to the British Crown, or be forced to leave their homeland. Most refuse, and are forcibly deported.

On this day in 1960, the US FDA declares Enovid to be the first officially approved combined oral contraceptive pill in the world, taking yet another step in the engineering of human population levels.

On this day in 1961, the Antarctic Treaty comes into force. It sets aside the Antarctic as a scientific preserve and bans military activity on the continent. Of course, this is only because the world elites want to hide a) the Mountains of Madness, b) the hole to the Hollow Earth, c) a secret alien base, d) the remains of a pre-catastrophic Atlantis, or e) all of the above.

On this day in 1970, one-hit-wonder Chubby Checker is arrested for possession of marijuana. Twisting ensues.

On this day in 1972, President Richard Nixon and White House Chief of Staff H.R. Haldeman are taped talking about using the CIA to obstruct the FBI’s investigation into the Watergate break-ins.

On this day in 1985, a terrorist bomb aboard Air India flight 182 brings the Boeing 747 down off the coast of Ireland, killing all 329 aboard, including 268 Canadians, 27 British citizens and 24 Indians. It was the largest mass murder in Canadian history and the deadliest aviation disaster to ever occur over a body of water. Canadian law enforcement determined that the main suspects in the bombing were members of the Sikh militant group Babbar Khalsa and other related groups based in Canada. Though a handful of members were arrested and tried, Inderjit Singh Reyat, a Canadian resident, was the only person convicted of involvement in the bombing. He was sentenced to 15 years in prison for building the bombs.

On this day in 1993, Lorena Gallo Bobbitt slices off the top of hubby John Wayne's cock and tosses it into an empty field. Late-night talk show hosts are only now allowing us to forget this sordid bit of sorry trivia.

On this day in 2001, a Senior Executive Intelligence Brief with the title Bin Laden Attacks May Be Imminent is sent to top White House officials. This means President George W. Bush received the warning during the previous day’s President Daily Briefing. Also on this day a CIA cable is distributed with the title, Possible Threat of Imminent Attack from Sunni Extremists. The cable warns that there is a high probability of near-term “spectacular” terrorist attacks resulting in numerous casualties.

On this day in 2006, the Miami Seven are arrested in connection with an alleged Sears Tower Plot. Check out this classic Daily Dirt article - THE MIAMI SEVEN : TERROR CELL OR WU-TARD CLAN? - to find out more about this ridiculous "gimme" for the US DOJ.
Posted by Jerky LeBoeuf at 4:00 AM