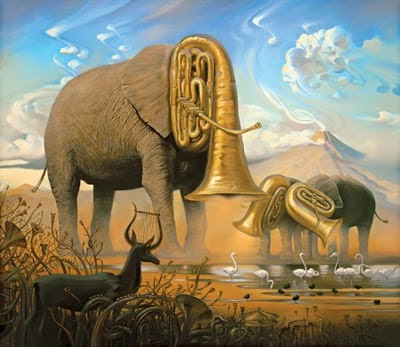 On this day in the year 1184 BC, the Greeks capture some unlucky bastard by the name of Troy.

On this day in 1776, the Continental Congress appoints Thomas Jefferson, John Adams, Benjamin Franklin, Roger Sherman, and Robert R. Livingston to the Committee of Five to draft a declaration of independence.

On this day in 1920, US Republican Party leaders gather in a room at the Blackstone Hotel to come to a consensus on their candidate for the presidential election, leading the Associated Press to first coin the political phrase smoke-filled room.

On this day in 1936, the International Surrealist Exhibition opens in London, England, leading to a blackface banana smoking mirror-melting penis-knife.

On this day in 1955, eighty-three are killed and at least 100 more are injured after an Austin-Healey and a Mercedes-Benz collide during Le Mans. It remains, to this day, the deadliest ever accident in motorsports.

On this day in 1963, Alabama Governor George Wallace stands at the door of Foster Auditorium at the University of Alabama in an attempt to block two black students, Vivian Malone and James Hood, from attending that school. Later in the day, accompanied by federalized National Guard troops, they are able to register.

Remember that Buddhist monk who set himself on fire in the streets of Saigon to protest the war in Vietnam? Actually, there were a bunch of them, but the first one, the one whose picture we all remember, was named Quang Duc. After training for years to ensure that he maintained control through the agony and didn't thrash, Quang Duc set himself alight to protest South Vietnamese treatment of the Buddhist himority, on this day in the year 1963. When his remains were burned a second time, for cremation, the flames refused to devour his sainted heart, which became a holy relic. The honorifit Thic was bestowed upon Quang Duc in recognition of his status as a Bodhisattva. Look it up.

On this day in 1964, World War II veteran Walter Seifert runs amok in an elementary school in Cologne, Germany, killing at least eight children and two teachers and seriously injuring several more with a home-made flamethrower and a lance.

On this day in 1979, "American icon" John Wayne dies of the cancer he by all the time he spent on the radioactive set of 1956’s Howard Hughes epic flop, The Conqueror.

On this day in 2001, "American icon" Timothy McVeigh is executed for his role in the Oklahoma City bombing.