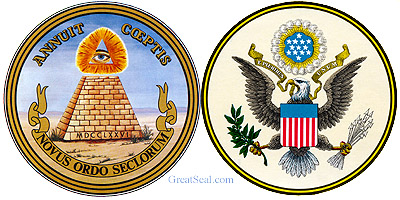 On this day in 1782, the US Congress adopts the Great Seal of the United States, using a design that is fairly dripping with occult significance. Read all about it.

On this day in 1793, inventor Eli Whitney applies for a patent on his cotton gin, but regulators prove reluctant when they find out you can't drink it. Not without getting cottonmouth, anyway.

On this day in 1837, Queen Victoria succeeds to the British throne, thus kicking off the Victorian Era.

On this day in 1945, the United States Secretary of State approves the transfer of great big Nazi Wernher von Braun and his team of great big Nazi rocket scientists to America, where they all lived happily ever after.

On this day in 1963, leaders from the United States and the Soviet Union agree to set up a telephone "Hot Line" to guarantee instant communication at all times, in case of a nuclear emergency. Less than one year later, Stanley Kubrick would have a fictional President Merkin Muffley hilariously inform a drunken Premiere Kissoff that one of his generals… "well, he went a little funny… funny in the head. And he did a silly thing." The film is Dr. Strangelove, or: How I Learned to Stop Worrying and Love the Bomb, and the President was played by the legendary Peter Sellers, in the absolute funniest one-sided telephone conversation ever caught on film. If you haven't seen this movie yet, what are you waiting for? You think art isn't important? Now more than ever, folks… now more than ever.

On this day in 1972, an 18½-minute gap appears in the tape recording of the conversations between U.S. President Richard Nixon and his advisers regarding the recent arrests of his operatives while breaking into the Watergate complex.

On this day in 2003, the WikiMedia Foundation is founded in St. Petersburg, Florida. Its most popular website, Wikipedia, always ranks in the Top Ten most visited websites worldwide, and has become a legitimate source of information.

On this day in 2009, during protests of the Iranian election, a lady named Neda Agha-Soltan is shot and killed by a pro-government Basij militia member. Her death was captured on video and it spread virally on the Internet, making it one of the most widely witnessed deaths in all of human history. The Iranian government's behavior in the wake of Neda's death is perhaps the best evidence the world has that said nation is run by some of the nastiest assholes around.
Posted by Jerky LeBoeuf at 4:00 AM