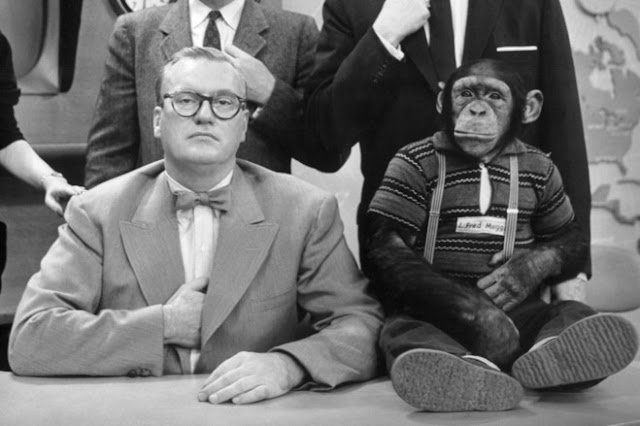 On this day in 1377, more than 2,000 people of the Italian city of Cesena are slaughtered by Papal Troops (Cesena Bloodbath).

***
On this day in 1451, Sultan Mehmed II inherits the throne of the Ottoman Empire.

***
On this day in 1637, Tulip mania collapses in the United Provinces (now the Netherlands) as sellers could no longer find buyers for their bulb contracts.

***
On this day in 1690, the colony of Massachusetts issues the first paper money in America.

***
On this day in 1815, the world's first commercial cheese factory is established in Switzerland. Never before have so many people cut so much cheese at such close proximity to each other without starting a riot.

***
On this day in 1870, the Fifteenth Amendment to the United States Constitution is ratified, guaranteeing voting rights to citizens regardless of race.

***
On this day in 1953, a chimpanzee by the name of J. Fred Muggs becomes a media sensation when Dave Garroway hires him as a co-host for his Today Show, on NBC. After biting actress Martha "Big Mouth" Raye in 1954, Muggs is sent on an international good-will tour, prompting one surly Soviet propagandist to write: "A symbol of the American way of life, Muggs is necessary in order that the average American should not look into reports on rising taxes, and decreasing pay, but rather laugh at the funny mug of a chimpanzee." Ouch... Nice shot, Igor.

***
On this day in 1959, the music dies when 22-year-old seminal rock legend Buddy Holly, 17-year-old flash-in-the-pan Ritchie Valens, and 28-year-old rock novelty act J.P. "The Big Bopper" Richardson all perish when their plane crashes in Iowa a few minutes after taking off from Moorehead, Minnesota. Oh, if only the Grim Reaperhad taken Don McLean, instead! Then, instead of being known as "the day the music died," it would be known as "the day the guy who wrote The Day the Music Died died!"

***
On this day in 1971, New York Police Officer Frank Serpico is shot during a drug bust in Brooklyn and survives to later testify against police corruption. Many believe the incident proves that NYPD officers tried to kill him.

***
On this day in 1989, a military coup overthrows Alfredo Stroessner, dictator of Paraguay since 1954.

***
On this day in the year 1998, ignoring speed and altitude restrictions, Marine Corps captain Richard Ashby Top-Guns his jet through a cable car line in northern Italy, plunging twenty tourists 375 feet to their deaths. On the bright side, I'm sure the view during their death-plunge was breathtaking. Also on this day in 1998, after being mocked on TV by then-governor George Dubya Bush ("Please don't kill me!"), Texas inmate Karla Faye Tucker is executed, becoming the first woman executed in the United States since 1984.
Posted by Jeeribaldi at 3:00 AM