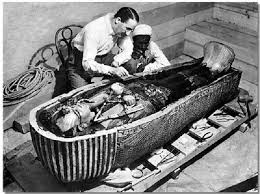 On this day in the year 600, Pope Gregory declares that the correct response to a sneeze is "God bless You." It would be another thirteen-hundred plus years before the Vatican decreed the proper response to a fart, which, as we all know, is: "Nice one!"

***
On this day in 1852, the Studebaker Brothers wagon company, precursor of the automobile manufacturer, is established.

***
On this day in 1923, after a 30-year search, Howard Carter penetrates King Tut's long-sealed tomb in Egypt's Valley of Kings. He was the first human being to lay eyes on the dead boy king in nearly three millennia. Grave robbing + 3000 years = legitimate archeology!

***
On this day in 1943, members of the White Rose student society in Munich paint the words "Out with Hitler!" and "Hitler is a murderer!" and "Long live freedom!" on a prominent, well-traveled overpass. On February 18, the tight-knit group of student activists is apprehended after a groundskeeper, who was also a Nazi party member, sees them passing out anti-Hitler leaflets on campus. On February 22, after a show trial, they are all executed by guillotine. They remain an inspiration to all who struggle in the name of truth and justice against impossible odds.

***
On this day in 1960, the U.S. Navy submarine USS Triton begins Operation Sandblast, setting sail from New London, Connecticut, to begin the first submerged circumnavigation of the globe.

***
Happy Birthday, Hezbollah! The anti-Zionist paramilitary org is inaugurated on this day in 1985.

***
On this day in 1987, the trial of John Demjanjuk, accused of being a Nazi guard dubbed "Ivan the Terrible" in Treblinka extermination camp, starts in Jerusalem.

***
On this day in 2005, the Kyoto Protocol comes into force, following its ratification by Russia. Today, it's all but dead, as even nations like Australia and Canada have begun backing out.
Posted by Jeeribaldi at 3:00 AM