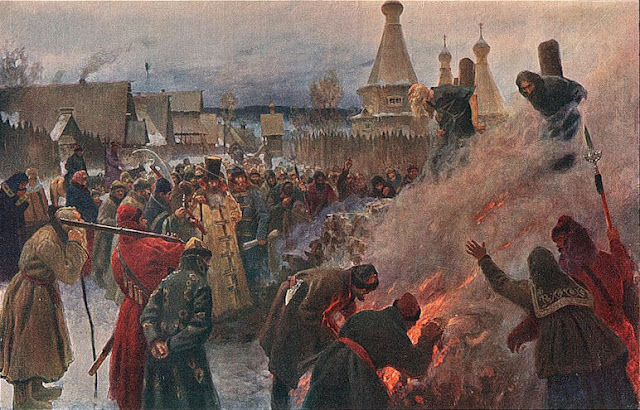 On this day in 1600, the philosopher Giordano Bruno is burned alive, for heresy, at Campo de' Fiori in Rome.

***
On this day in 1621, Myles Standish is appointed as first commander of Plymouth colony.

***
On this day in 1864, the Confederate submarine HL Hunley sends the Union ship Housatonic to a watery grave. It's the first time in history that a ship is sunk by submarine, and it remained the Confederacy's proudest moment until the presidential "elections" of 2000.

***
On this day in 1913, the New York Armory Show introduces Americans to some of the finest masterpieces of the Modern Art movement. The show was going well until the moment a monocle-sporting, cigar-chomping, top-hat-wearing plutocrat inquired about purchasing Picasso's Guitare to use as gift-wrapping paper.

***
On this day in 1933, the Blaine Act ends Prohibition in the United States.

***
On this day in 1972, sales of the Volkswagen Beetle exceed those of the Ford Model-T.

***
On this day in 1989, Whitesnake front-man David Coverdale marries "actress" Tawny Kitaen. Unfortunately, tragedy strikes when three members of the wedding party succumb to the toxic fog of industrial strength hairspray that had accumulated in the poorly-ventilated cathedral.

***
On this day in 1996, in Philadelphia, Pennsylvania, world champion Garry Kasparov beats the Deep Blue supercomputer in a chess match.

***
On this day in 1998, Aryan Nations "lieutenant" Larry Wayne Harris and his buddy, Bill Levitt, are arrested in Las Vegas after bragging about having enough anthrax to "kill every human being in the city." They actually had anthrax vaccine, but that's beside the point. Three years previous to this arrest, Harris - a self-proclaimed former CIA agent and author of a book that has been described as a "How To" manual for bioterrorists - was arrested for using fraudulent means to acquire bubonic plague. He kept the vials of deadly germs - which had been delivered to him via Federal Express - in the glove compartment of his car. Whotta guy!

***
On this day in 2000, the sharp-eyed ultra-right-wing lunatic-fringe-dwellers at FreeRepublic.com were quick to spot SATAN HIMSELF at a Democratic Candidates Debate held at the historical Apollo Theater in Harlem. The collection of genuine hate-mongers who hang out there actually had "serious" discussions about what, exactly, this "demonic" image meant. Was it put there by the Democrats themselves, as some sort of subliminal threat to the voting public?! Or was Gawd Almighty, Himself, trying to warn the nation about the Democrats' evil, baby-killin' ways?! You, dear reader, be the judge!

For those of you who can't see the image, it's the pale white geometric shape made by four uneven stars being projected against the backdrop, right between Gore and Bradley.
Posted by Jeeribaldi at 3:00 AM