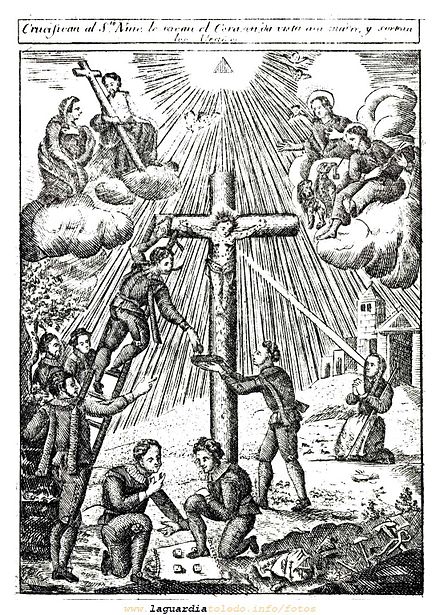 On this day in 1491, an auto-da-fé, held in the Brasero de la Dehesa outside of Ávila, concludes the case of the Holy Child of La Guardia with the public execution of several Jewish and converso suspects.

On this day in 1849, a Russian court sentences Fyodor Dostoevsky to death for anti-government activities linked to a radical intellectual group; his sentence is later commuted to hard labor.

On this day in 1885, Canadian rebel leader of the Métis and "Father of Manitoba", Louis Riel is executed for treason.

On this day in 1938, LSD is first synthesized by Swiss chemist Dr. Albert Hofmann at the Sandoz Laboratories in Basel, Switzerland.

On this day in 1957, deep in the backwoods of Wisconsin, psycho-killer Ed Gein (rhymes with fiend) butchers his final victim. A necrophile who wore one victim's tanned hide like a robe during bizarre moonlight rituals, Gein also dug up corpses from local graveyards. When police finally searched his property, they discovered such disturbing home decorating ideas as lamps and chairs made out of arms and legs, furniture upholstered with human skin, and a teacup full of nipples. That's why Gein is still regarded as the Martha Stewart of psycho serial-killers. His exploits inspired Robert Bloch's novel Psycho, as well as the subsequent Hitchcock classic, and they were the germinal basis of the "true story" mentioned at the beginning of The Texas Chainsaw Massacre.

On this day in 1988, in the first open election in more than a decade, voters in Pakistan elect populist candidate Benazir Bhutto to be Prime Minister of Pakistan.

On this day in 1989, a death squad composed of El Salvadoran army troops kills six Jesuit priests and two others at Jose Simeon Canas University.

On this day in 1999, pedo-popstar Gary Glitter - real name Paul Francis Gadd - is found guilty of possessing and creating child pornography. In Canada, where Glitter's music plays a significant role in hockey culture, the reaction is swift. A major Canadian brewery decides to stop airing commercials featuring Glitter's creepy yet undeniably rousing stomp-anthem, Rock and Roll Part Two. Later that same day, the NHL's Calgary Flames decide to no longer play the tune at their arena. Glitter serves time in jail, is released, makes his way to Cambodia, where he is soon arrested, jailed for assaulting young boys, then deported back to England, where he's currently working on making a comeback. Of course, by "comeback," yer old pal Jerky doesn't mean he wants to return to the music industry. That would be impossible. Come to think of it, you probably don't want to know what I mean by "comeback." So forget I even wrote it.
Posted by Jerky LeBoeuf at 3:00 AM