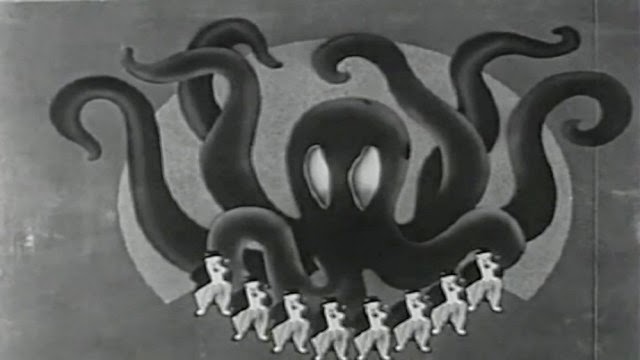 One of the goals I have for Useless Eater Blog is that it serve as something like an ongoing undergraduate-level course in parapolitical science. Obviously, not every post or article is going to be in keeping with this lofty ambition - I'm only human after all, and am not above using my tiny platform to launch the occasional editorial cheap-shot, or pick on the odd easy target for a laugh - but my resolution for the New Year is to make sure the substance/bullshit ratio becomes a little less embarrassing to me.

In order to separate the wheat from the chaff, I will be creating a new Useless Eater Blog sub-section called ParaPolitical Science 101. In this section, I will be warehousing those posts and articles that I feel meet a certain standard and serve to increase my regular readers' knowledge and awareness about everything from forgotten chapters in ancient history, to in depth analysis of contemporary "conspiracy culture" developments... for better or worse.

Having said that, my study guides, or "concordances", for Scott Noble's excellent documentary series The Power Principle represent exactly the kind of work that I'm going to be doing more of in the coming years. In these three articles, I attempt to summarize - and, in certain respects, expand upon - the information presented in these insightful, thought-provoking documentary films, which Information Clearing House called "probably the best documentary ever made about American foreign policy."

I'll be using Metanoia Films' own summaries to describe the contents of each film in the series.

The Power Principle I: EMPIRE

An Introduction to the Empire; Iran – Oil and Geopolitics; Guatemala – the “merger of state and corporate power”; The Congo – Neocolonialism; Grenada – “The Mafia Doctrine”; Chile – “libertarianism with a small l"; Globalization: Consequences. 1945: Grand Area Strategy; Fascism: a “rational system of the plutocracy”; Case Studies: the Greek Communists; The Italian Communists; the Spanish Anarchists; Fascism’s Western backers; Trading with the Enemy; Fascism as “preservation of civilization”; the Cold War and “A Century of Fear”.

The Soviet Menace?; Case Studies: El Salvador, Nicaragua; Propaganda: Self-Deception and blowback; The “International Communist Conspiracy”; Declassified Documents; NSC 68; The Pentagon as Keynsian Mechanism; The Military Industrial Complex; The War against the Third World; Shifting rationales; What is imperialism?; Case Study: Haiti; “War is a racket”. Fear-based conditioning - The War of the Worlds, The Triumph of the Will; World view Warfare; The Russians are coming; Television: The “perfect propaganda medium”; Soviet vs. American propaganda; Hollywood and the Pentagon; Psywarriors and the media; Operation Mockingbird; The Pentagon Pundits; Project Revere; The Bomber Gap; “scare the hell out of them”.


Mutually Assured Destruction; MAD men - Curtis Lemay and the super hawks; MAD men - Hermann Kahn and the Rand Corporation; Over flights as provocation; Cuba: the “danger of a good example”; terrorism against Cuba; “Unconventional warfare”; the Cuban Missile Crisis and the “man who saved the world”. Why did the Soviet Union collapse?; Gorbachev: a “more violent, less stable world”; the Pentagon’s New Map; Did Ronald Reagan end the Cold War?; The Brink of Apocalypse: Able Archer; The betrayal of Russia; The expansion of NATO; Yugoslavia and Libya; the Yeltsin coup; Living standards in the former Soviet Union; A third way?

Ideally, I would urge you to watch each of these three films from beginning to end, in the proper order, with my study guides open in another browser should you require clarification or more information about all the various historical events, individuals, or contributors therein. However, for the parapolitical seeker who is short on time, my concordances can also serve as a handy summary of these three feature-length films, in a format that shouldn't take you much more than twenty minutes to read, total. Hence my suggestion that you "clip and save" them somewhere for future reference.

If you enjoyed my concordances for The Power Principle series, then you might also enjoy a similar piece I wrote a couple years ago for Lutz Dammbeck's 2003 documentary The Net: The Unabomber, LSD and the Internet. As with the above films, I guarantee that you will encounter a bunch of new, mind-blowing information that you've never come across before... all of it impeccably sourced and researched.
Posted by Jerky LeBoeuf at 7:59 PM