1. If you're one of the many people who feel as though you should be really excited by the new film Inherent Vice, but are confused as to why, this Rolling Stone Magazine primer on the many worlds of Thomas Pynchon should help to hip you to one of the most worthwhile cults of the literary postwar era. Titled "Pynchon for Beginners", it starts:

Welcome to the club. This is precisely the mood that the 77-year-old writer has labored to create over eight revered novels and novellas since the mid-Sixties, pushing his adventurous readers off their pedestals of narrative security and trust in government. "He's fucking with you all the time," Anderson recently said of the “anonymous” novelist — the last publicly circulated picture of the author dates back to 1955 — and he means this as a compliment. At a slender 370 pages, Inherent Vice is the quickest way into Pynchon's oeuvre, itself the wildest adventure in postmodern letters. (The collected hardcover editions of his books weigh as much as an unruly eight-year-old in need of a nap.) So maybe it’s time to try him out. The good news: You're already halfway there if you live for rock & roll, enjoy a good conspiracy story and can go with the voluminous flow. 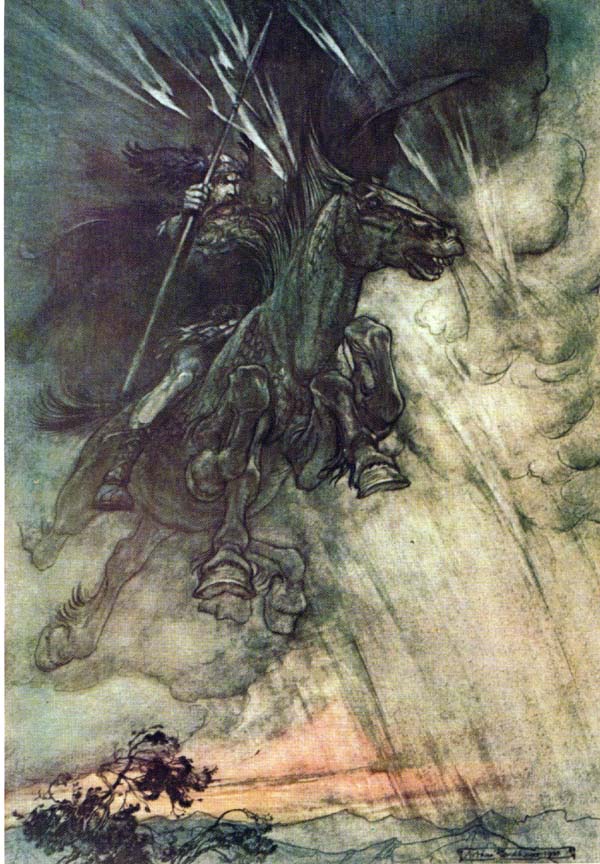 2. Thanks to my friend, Aussie author Christian Read, for pointing me towards this excellent essay about Carl Jung and the resurgence of Wotan Consciousness in the mid-century, featured on the excellent Madness and Civilization blog. Among the many intriguing thoughts found within:


When we look back to the time before 1914, we find ourselves living in a world of events which would have been inconceivable before the war. We were even beginning to regard war between civilized nations as a fable, thinking that such an absurdity would become less and less possible in our rational, internationally organized world. And what came after the war was a veritable witches’ Sabbath.

...we shall have to wait some time before anyone is able to assess the kind of age that we are living in.

...what is more than curious – indeed, piquant to a degree – is that an ancient God of storm and frenzy, the long quiescent Wotan, should awake, like an extinct volcano, to new activity, in a civilized country that had long been supposed to have outgrown the Middle Ages.

In fact, the above essay makes an excellent companion piece to the primer on Pynchon's fiction. What a coincidence!

3. For my friends on the Left, there has been scant good news over the last few decades to gladden their hearts. In a world where a relatively conservative politician like Barrack Obama is routinely derided as a Marxist revolutionary by the ignoramuses of the mainstream media, the idea of genuinely progressive socialist reform seems like an impossible dream. That's why recent political news out of Spain should give us all a little hope. In this wonderful essay, taken from one of his recent speeches, Podemos party leader Pablo Iglesias explains how the Left around the world can make similar gains.

The enemy wants nothing more than to laugh at you. You can wear a t-shirt with the hammer and sickle. You can even carry a huge flag, and then go back home with your flag, all while the enemy laughs at you. Because the people, the workers, they prefer the enemy to you. They believe him. They understand him when he speaks. They don’t understand you. And maybe you are right! Maybe you can ask your children to write that on your tombstone: “He was always right — but no one ever knew.”

When you study successful transformational movements, you see that the key to success is to establish a certain identity between your analysis and what the majority feels. And that is very hard. It implies riding out contradictions.

Do you think I have any ideological problem with a forty-eight hour or a seventy-two-hour wildcat strike? Not in the least! The problem is that organizing a strike has nothing to do with how badly you or I want to do it. It has to do with union strength, and both you and I are insignificant there...

I’ve manned the picket lines in front of the bus depots in Madrid. The people there, at dawn, you know where they had to go? To work. They were no scabs. But they would be fired from their jobs, because at their jobs there were no unions to defend them. Because the workers who can defend themselves, like those in the shipyards, in the mines, they have strong unions. But the kids that work as telemarketers, or at pizza joints, or the girls working in retail, they cannot defend themselves.

Keep reading. There is a great message spelled out here.
Posted by Jerky LeBoeuf at 2:12 AM