1. You know how, in the strange online world of "conspiracy theory" research, individuals who fall out of favor with any particular message board's groupthink - and stick to their guns about it - will invariably be called out as "disinfo" agents? It's a serious accusation, to declare someone a paid provocateur with a mandate to infiltrate an online group full of legitimate, unbiased truth-seekers and pervert their ability to properly assess the goings-on by mixing a little bit of truth with a whole lot of fabrication, thus rendering everything and anything that group comes to take as an assumed truth more easy to "debunk" at some future point in time. Well, after reading this article from the Leopold Report - an article that paints in intricate, detailed little brushstrokes just exactly how damaging to the concepts of truth and justice and history a real disinformation agent can truly be - you'll never again call someone who is merely wrong-headed or dogmatic a disinfo agent.

This Oswald LeWinter fellow (1931-2013) described at the link is a criminal of the highest order, and you'll be shocked to discover how one CIA-connected literature prof's twisted lie/truth combos have hindered and poisoned investigations into everything from the murder of Olaf Palme to the October Surprise. Everyone from InterPol to Pentagon whistleblower Barbara Honegger got caught up in his web of bullshit.

[Journalist Robert] Parry asked LeWinter why he had contacted journalists to - as he claimed - expose October Surprise, when he had submitted so much obviously false information. One of these was that he claimed that one of Reagan's advisers had been in Paris and negotiated with the Iranian leadership, when it was easy to prove that the same person at that time was in the US - as a participant in a live television program (Parry 1993:67ff).

"I was asked by some people to mount a disinformation campaign". [..] "Barbara Honegger [..] had started enough interest in the newspaper community and the media to throw a negative light on George Bush's candidacy, potentially a negative light. The people who asked me to intervene felt that the country could not stand another Watergate, another major political scandal and upheaval, and also worried that the Democratic party's candidate might have hurt the intelligence community, which was just in the process of recovering from the damage that had been done to it during the Carter administration."

His next statement is important:

"I contacted Barbara Honegger through another person. [..] I managed to pass on some information to her which had factual elements in it, but also elements that with a little bit of digging could be discovered to be questionable. The story would lead some investigators to spend time and effort running into blind alleys, with the result that eventually the whole story would be discredited."

LeWinter also admitted to having received USD 100,000 in payment for his disinformation campaign.

Ultimately, it took a man like investigative journalist Robert Parry (a personal favorite of mine) to suss out just a bit of the truth about LeWinter's true character. This is truly terrifying stuff, and one of the reasons why perjury is considered such a serious goddamn crime.

2. Even though I can't help but harbor suspicions that Western accounts of Soviet leader Joseph Stalin's criminal depravity have been exaggerated for a century's worth of propaganda purposes, this American Scholar article about Stalin's unlikely rise to power is still very much worth your time.

Except for Mao, and perhaps Genghis Khan, Joseph Stalin stands as the greatest mass murderer in history. His war on the peasantry killed perhaps 14 million people, half of whom were deliberately starved to death. This project of “dekulakization” and “collectivization” overshadows even the Great Purge of 1936–38, which claimed some four million lives. Several small ethnic minorities suspected of disloyalty lost half their population, and tens of millions were swallowed into the massive system of forced labor camps known as the Gulag Archipelago. ...

How was all this carnage possible? How did a revolution made in the name of social justice, and supported by so many progressive spirits around the world, lead to such monstrous results? What made Stalin capable of such cruelty, and how did he manage to accumulate the power to practice it?

Keep reading to find out more! 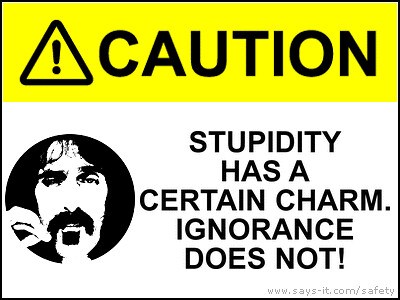 3. One of the most intriguing if little known episodes of the Cold War Collapse era involved Frank Zappa's brief tenure as "special ambassador to the West on trade, culture and tourism" for the newly-liberated nation of Czechoslovakia. See, it turns out Vaclav Havel - dissident author and leading figure in the "Velvet Revolution" - was a really big fan of Zappa's band, The Mothers. As journalist Jack Anderson explained it in his oddly apologetic account of the events:

Havel, a playwright known for absurd satire, met Zappa in Prague in January 1990, and the two men hit it off immediately. Havel had long been a fan of Zappa's music genius and even credited his music as part of the inspiration for the anti-communist revolution. A Czech group, The Plastic People of the Universe, named after one of Zappa's songs, copied his style and became an underground sensation in Czechoslovakia. Their revolutionary lyrics so irritated the communist government that the group was thrown behind bars for disturbing the peace. That mobilized Havel and other artists to form a dissident group that led the opposition and, after communism was toppled, formed the nucleus of the current Czech government. So Havel had plenty to thank Zappa for. He was so grateful, in fact, that he impetuously created the special ambassadorship for Zappa. The musician left town with Havel's praise in his ears and the adulation of hundreds of fans who treated him as a Czech national hero.

Unfortunately for Frank, the Bush Crime Family didn't much care for the cut of his jib. They dispatched their most trusted consigliere, unindicted co-conspirator James Baker III, to threaten Havel thusly:

Frank Zappa happens to be my very favorite musician, as well as a personal hero and an ongoing inspiration for more reasons than I could possibly list in this space. So you'll forgive me for being suspicious about the fact that this rather formidable individual would be dead and buried a mere three years after his brush with Pure Evil, chronicled above.
Posted by Jerky LeBoeuf at 1:51 PM