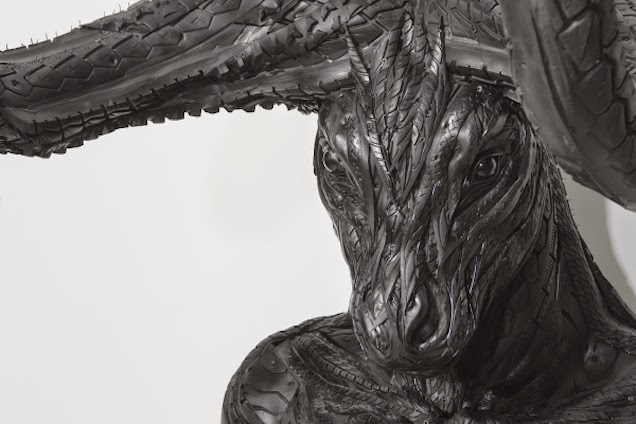 1. Not so much suggested reading as suggested looking in this case, I urge you to check out this io9 story about artist Yong Ho Ji, who takes old, worn out vehicular tires, tears them to shreds, and then turns them into ridiculously beautiful things. Along with an extensive gallery of some of Yong's most beautiful artworks, there is also a short documentary about the artist and his work. Here is that film:

2. Speaking of ornate and beautiful objects, this incredibly detailed, exquisitely machined, combination desk and cabinet, hand-crafted for King Frederick William II by the celebrated Roentgen Brothers may just make you re-think your too-cool-for-school attitude towards the value and appeal of antique furniture!


One of the finest achievements of European furniture making, this cabinet is the most important product from Abraham and David Roentgen's workshop. A writing cabinet crowned with a chiming clock, it features finely designed marquetry panels and elaborate mechanisms that allow for doors and drawers to be opened automatically at the touch of a button. The Berlin cabinet is uniquely remarkable for its ornate decoration, mechanical complexity, and sheer size. This cabinet is from Kunstgewerbemuseum, Staatliche Museen zu Berlin, and is on view at The Metropolitan Museum of Art in the exhibition Extravagant Inventions: The Princely Furniture of the Roentgens.

Take a gander for yourself!

3. All you slightly older cinema fans out there should read this wonderful remembrance of Alfred Hitchcock by his friend and fellow filmmaker David Freeman. Although occasionally agonizing to read, it's also quite wonderful in places. For instance, try not to be drawn in by this introduction:

He was a bit like the Eiffel Tower. You hear about it all your life, and when you finally see the damn thing, it looks so much like the postcards, it's difficult to see it fresh. Hitchcock's public self was so distinct that it was often impossible to know if I was dealing with the corporeal man or the invented persona. I think he sometimes got it confused, particularly in his storytelling. He was a well-known raconteur, and some of his stories were widely known and repeated - often by him. There were times when he seemed to feel obliged to tell Alfred Hitchcock stories. Sometimes he was at the top of his form and told them well; other times less so. I was aware of this and, as I came to see, so was he. With his high-waisted black suits--with trousers that rested above his enormous belly, leaving just a few inches of white shirt exposed and with a black tie tucked into his pants--he looked positively fictional, out of Dickens, perhaps, or a banker by Evelyn Waugh.

It gets better from there. Enjoy!
Posted by Jerky LeBoeuf at 8:31 PM