Over at the discussion board for the essential and always-stimulating Rigorous Intuition blog, participant GnosticHeresy_2 has uncovered a creepy similarity between the recently unveiled official mascots of the London 2012 Olympic Games and one of Elizabethan occultist John Dee's astrological hieroglyphs. Just take a look and see for yourself... 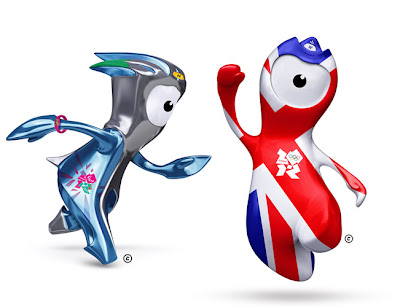 Here is the text that accompanies the explanation of the glyph in question, taken from the Monas Hieroglyphica, Dee's esoteric treatise on symbolic language, originally published in 1564:

THEOREM X
The following figure of the zodiacal sign Aries, in use amongst the astronomers, is the same for all the world (a sort of erection both cutting and pointed), and it is understood that it indicates the origin of the fiery triplicity in that part of the sky.
Therefore, we have added the astronomical sign Aries to signify that in the practice of this Monad the use of fire is required.
We finish the brief hieroglyphic consideration of our Monad, which we would sum up in one only hieroglyphic context:
The Sun and the Moon of this Monad desire that the Elements in which the tenth proportion will flower, shall be separated, and this is done by the application of Fire.