WHO IS FETHULLAH GULEN? 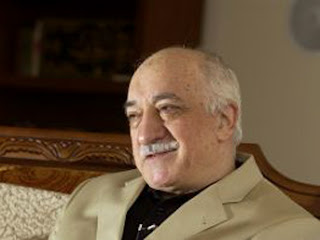 The Man, the Movement, the Gule-Meister!
You've probably never heard of him, but Mohammed Fethullah Gülen is one of the most controversial and divisive - yet profoundly influential - mainstream Islamic personalities to emerge in recent decades. He remains a veritable institution in his homeland, Turkey, despite having fled to Pennsylvania after being brought up on charges of encouraging the dismantling of Turkey's secular government in order to replace it with a state built upon an Islamic foundation. There he remains to this day, in a veritable fortress on a 45-acre estate in the Keystone State's mountainous Pocono region.

Gülen has amassed an estimated $25 billion fortune over the years, most of it from media properties and other investments. However, much of that fortune stems from the vast number of charter schools he has established all over the world. Currently, Gülen schools can be found in 25 of America's 50 states - usually with innocuous names like "Bumblebee Academy" - and the FBI has recently launched an investigation into the movement's suspicious fiscal practices and alleged visa abuse.

Much has been written about Gülen over the years, most of it ridiculously contradictory. For instance, despite its vocal stance against all forms of terrorism, many Western sources have portrayed the Gülenist movement as anti-Semitic and anti-Western, calling it a dangerous proselytizing force that seeks to "Islamize" the Christian West. Socially conservative and far-right periodicals in Europe have gone so far as to claim Gülen is a new Khomeini, devoted to the resurrection of the Ottoman Empire and even the establishment of a global caliphate... a "New Islamic World Order".
The Islamic world sees a very different Gülen. To conservative Islamic public intellectuals, Gülen is an agent of the the Western intelligence aparat, an American puppet, a tool of the Vatican and a Zionist patsy. They see the "kinder, gentler" Islam being preached in Gülenist schools throughout the Middle East and claim it is an attempt to soften or "Christianize" Islam in order to make it more docile, thus rendering the region easy pickings for the Western power elites who are pulling Gülen's strings.
In Turkey, despite his substantial following, Gülen has enemies on both sides of the fence. Conservatives side with the hard-line Islamist view, while the nation's substantial secularist segment sees this "imam in exile" and his movement as a clear and present danger to Turkey's long, proud history of separation between Mosque and State.
Meanwhile, Turkey's ruling AK (Justice and Development) Party has fostered close ties with the Gülenist movement, and those who criticize from the secularist perspective are beginning to feel the pinch. In recent weeks, Turkish police have jailed anti-Gülenist journalist Ahmet Sik, raided his lawyer's and publisher's offices and seized every existing copy of the unfinished manuscript of his book, The Imam's Army, much to the dismay of global free press advocates Reporters Without Borders.
The court order that launched these lightning raids was issued on the grounds that Sik's book was "a document that clearly makes the propaganda of a terrorist organization," in reference to Turkey's hugely controversial and ironically byzantine Ergenekon meta-conspiracy - as dense and complex a conspiracy as your humble bloggist has ever tried to wrap his head around. This, of course, does little to allay fears that much of Turkey's police and judiciary are currently under the sway of Gülen and his cronies.
What does the future hold for Mohammed Fethullah Gülen and the movement he created? Because Turkey is - and for the foreseeable future will remain - one of the most strategically important areas in the world, it is the duty of every concerned citizen to pay attention to what is going on there. Alert readers need not be reminded that Turkey isn't alone in its use and abuse of the "terrorist" label to undermine critics of The Powers That Be. Recognizing this does not legitimize the practice. Rather, it should serve to remind us that these recent developments are not a Turkish problem, but a human problem.
In any case, one thing is certain: Mohammed Fethullah Gülen is a force to be reckoned with, and we should all be paying closer attention. 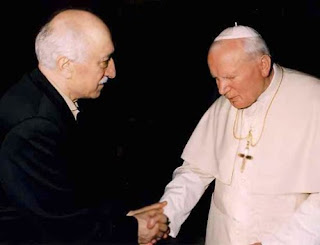 Friends in High Places...
Posted by Jerky LeBoeuf at 8:04 PM

Email ThisBlogThis!Share to TwitterShare to FacebookShare to Pinterest
Labels: Ergenekon, Freedom of the Press, Terrorism, Turkey